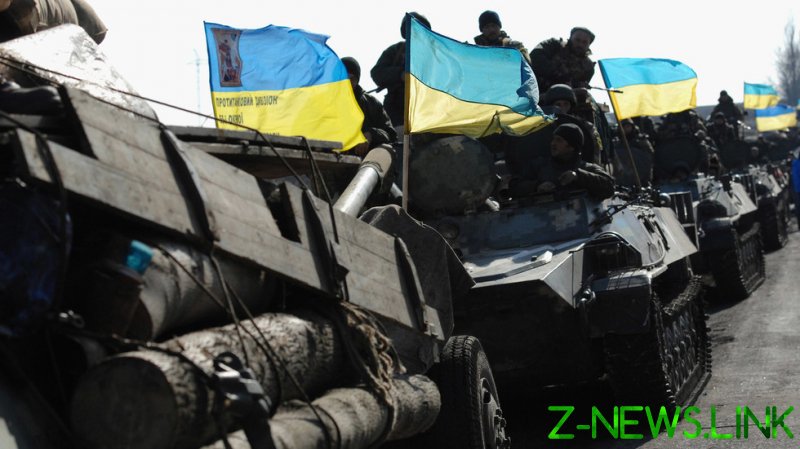 Speaking to reporters on Thursday, Kremlin press secretary Dmitry Peskov said that “the probability of hostilities in Ukraine is still high” when asked about the likelihood of a war in the country’s east.

“This is a matter of particular concern and worry for us,” he added.

Peskov’s remarks come a day after Russia’s foreign ministry spokeswoman alleged that Kiev was significantly beefing up its military force in the region by “pulling heavy equipment and personnel” into the area.

“According to some reports, the number of troops… in the conflict zone already reaches 125,000 people,” Maria Zakharova said on Wednesday.

“This, if anyone does not know, is half of the entire composition of the Armed Forces of Ukraine,” she added.

Tensions on the Russian-Ukrainian border have grown in recent weeks. Speaking on the same day at the Kiev Security Forum, US Under Secretary of State for Political Affairs Victoria Nuland warned Russia against making any moves “to internally destabilize Ukraine or use these forces to enter the country.”

Should Russia’s military do so, she insisted, Moscow “will be met with high-impact economic measures, the likes of which we have not used before, from all of [NATO,]” she insisted.

The Kremlin, however, has consistently rejected claims made by the US-led military bloc and Western media reports that Moscow is massing its military along the frontier line with Ukraine, blasting the claims as “hysteria.”

Peskov also insisted that Russia poses no threat to anyone, and that “the movement of our armed forces on our own territory should be of no concern to anyone.”