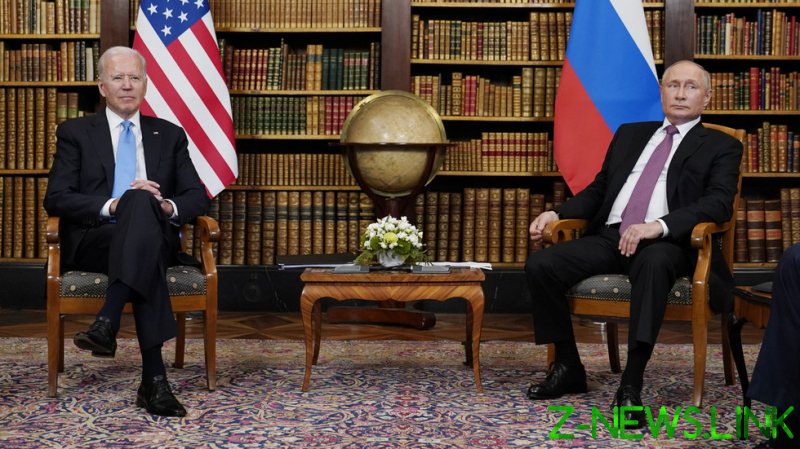 On Tuesday, the day before the summit, Putin’s foreign policy aide, Yury Ushakov, revealed that the heads of state are planning to touch on a wide range of topics, including Covid-19, climate change, and the fight against cybercrime.

They will also discuss a wide range of regional issues, Ushakov noted, including “the Middle East, Syria, Libya, the situation concerning the Iranian nuclear program, Afghanistan, the Korean Peninsula, and Nagorno-Karabakh. And, obviously, Ukraine.”

The Kremlin official also revealed that the two parties “worked hard” to develop the summit’s agenda and overcame “disagreements and inconsistencies” with relative ease.

The entire event is expected to last about four or five hours.

The first stage of the summit is a smaller, more intimate meeting, attended by just the two presidents, alongside Russian Foreign Minister Sergey Lavrov, US Secretary of State Antony Blinken, and their translators. Following this opening discussion, the gathering is set to expand, including many more members of the two countries’ delegations.

There are no specific plans for a one-on-one discussion between the two leaders, although it may happen if they both opt to do so.

There has also been no commitment to publish a joint document or host a joint press conference following the summit. Putin, who left Sochi Airport earlier this morning, is due to fly home in the evening, after its conclusion.

The location of the landmark summit is Villa La Grange, an 18th-century villa overlooking Lake Geneva. As well as beefing up the city’s level of security, including restrictions on movement for locals, Geneva has also been decorated for the occasion, with the city’s main bridge, the Pont du Mont-Blanc, now lined with both Russian and US flags.

The landmark summit was initially proposed by Washington and marks the first Russia-US summit since Putin met with then-President Donald Trump in Helsinki in July 2018. That encounter failed to result in improved bilateral relations, and both delegations will be hoping that Wednesday’s meeting is more fruitful.