Russia unveils combat robots that can take down tanks without putting soldiers in harm’s way, as part of massive Zapad war games 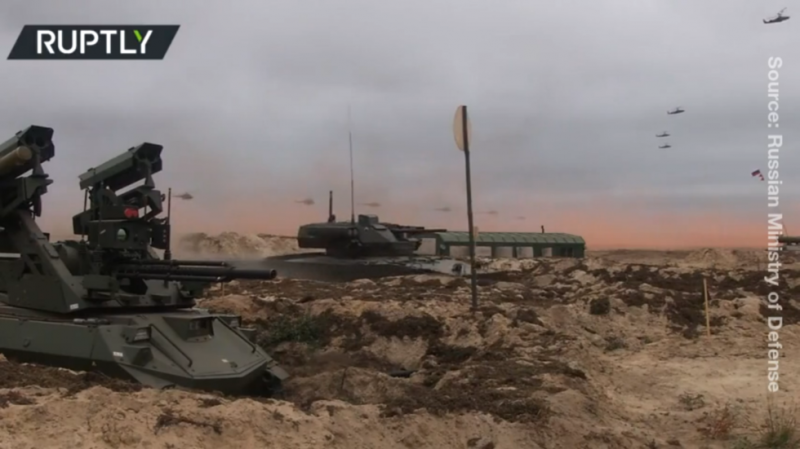 In footage released by the country’s Ministry of Defense, two models of unmanned fighting vehicles showed off their capabilities and armaments, practicing turning fire on a simulated enemy during the Zapad-2021 joint exercises.

Among the two is the Uran-9 armored fighting vehicle, built like a conventional tank but driven remotely. It can be armed with both cannons and rocket systems, and is equipped with high-tech infrared and laser sensors to find and hit its targets. While little has been seen of the Uran-9 until the latest drills, early models are understood to have seen action during the Syrian Civil War. The fighting vehicle even has flamethrowers designed to scorch enemy infantry and clear out fortified positions.

In what army chiefs say is the first time the robots had been used in combat formations, the Nerekhta combat vehicle was also deployed for the drills. The tracked vehicle, equipped with a central cannon, has been designed for reconnaissance in areas too dangerous to send soldiers. It carries a mounted machine gun as well as a grenade launcher. “The Nerekhta combat robot is designed to perform reconnaissance tasks, direct fire on enemy positions, and quickly deliver ammunition and equipment,” officials said.

Putin, along with other members of Russia’s top brass, was on hand to inspect the display, watching explosions and gunfire during the drills from a command post.

The Zapad-2021 exercise, which has become a regular feature in the military calendar, brings together Russian and Belarusian soldiers, as well as those from a number of other states, to improve their ability to fight side-by-side and showcase new technology.