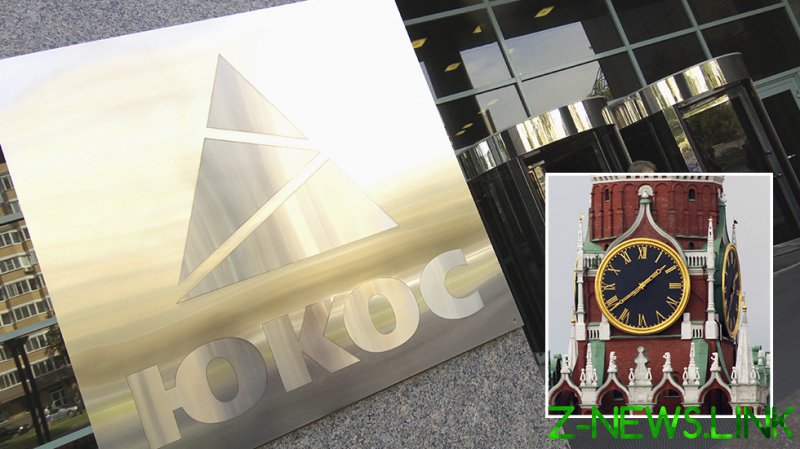 Hearings as part of the $50 billion case began at the Supreme Court in The Hague on Friday, with lawyers for the Russian government seeking to overturn a Dutch tribunal’s previous decision to hand damages to the business’ ex-shareholders. Yukos’ former owners say the company’s assets were confiscated in what amounted to state “appropriation.” Moscow insists that they are not ‘bona fide’ investors, and that international law does not have jurisdiction.

Speaking at the opening of the case, Russian Deputy Justice Minister Mikhail Galperin said that the claimants demands “are not only unlawful, but immoral.” According to him, the oligarchs who once owned the enterprise had “acquired Yukos for peanuts by means of fraud and bribery.” Then, he said, “they extracted billions of dollars… by means of offshore schemes, as well as tax and corporate manipulations.”

A lawyer for the former shareholders, however, said that Russia “readily hurls accusations” and asked the court “to look at the facts.” “That seems to be much more sensible,” the advocate added. The appeal is expected to run into 2022.

Russia insists that the long-standing legal battle should never have been considered outside the country. In December, Galperin said that the country’s “main legal argument is that Russia never agreed for the case to be heard by an international court of arbitration, which means that the judges had no mandate to consider the lawsuit Yukos ex-shareholders filed against Russia.” His officials say that only domestic courts have jurisdiction, and Dutch rulings failed to consider the country’s anti-fraud laws.

Late last year, Russia’s top court said that Moscow should refuse to pay damages to the oligarchs, even if the appeal in The Hague goes against it. A ruling from the Constitutional Court in Moscow states that, while the government of the day began the process of signing up to the pact in 1994, they did not have the authority to make national laws inferior to international agreements, or to “challenge the competence” of Russian courts. Therefore, the jurists conclude, adhering to the Dutch court’s demands would be “unconstitutional.”

Standing at around $50 billion, in the same ballpark as Russia’s annual military budget, the historic settlement is thought to be the largest award ever handed out by judges anywhere in the world.

Those who lost cash when the gas giant went bust have since sought the support of Western governments in clawing back funds. In November, a US court threw out a request for the country to confiscate Russian assets abroad as an insurance policy in case Moscow refuses to pay up. A judge in the simultaneous hearing refused, saying that “the Russian Federation is a sovereign country with economic tendrils that cross the globe, not an insecure potential debtor that must be required to post security lest there be no assets to seize at a later date.”

At its height, Yukos produced 20 percent of Russia’s oil, making it one of the world’s largest firms. Formed from the privatization of state industries after the fall of the Soviet Union, it enriched controversial oligarch Mikhail Khodorkovsky overnight after he and his companions bought it for a mere $170 million. Its true value was estimated to be around $5 billion, leading one economic adviser to describe the sale as “the swindle of the century.”

A $27 billion tax bill handed to the business subsequently saw its assets confiscated, and much of the former empire was reabsorbed into state-owned energy enterprises.