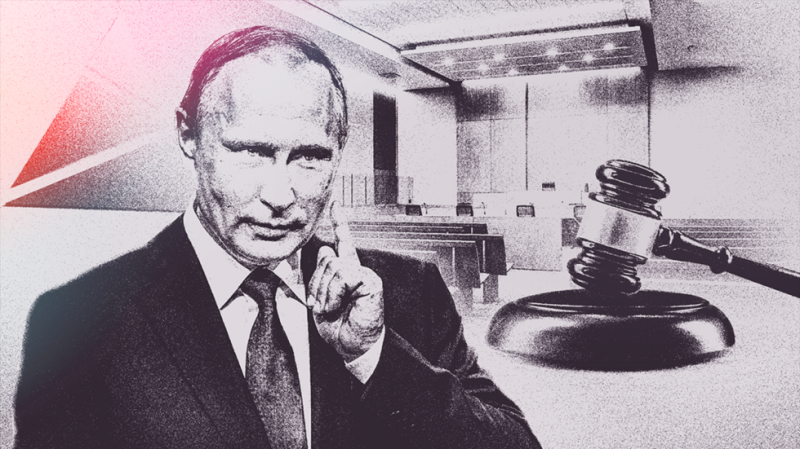 An international legal battle over the collapsed Yukos oil empire has been raging for more than a decade in courts across the world, most notably in the Netherlands and the US. A record-breaking $57 billion legal bill now hangs in the balance.

Former shareholders in the now-defunct company accuse the Russian government, which regards them as oligarchs acting in bad faith, of “appropriating” its assets and causing it to go bankrupt. Appealing initial decisions by a Dutch tribunal in favor of the claimants, the country’s lawyers have said that judges had failed to take into account Russian laws against corruption and fraud.

According to Russian Justice Minister Konstantin Chuychenko, the case is part of a “legal war” being waged against the country in international courts. “The situation is very difficult and serious,” he said. “Russia must adequately defend itself, and sometimes even attack back.”

Quite how the state might strike back became clear in December, when the Constitutional Court, one of its highest judicial bodies, ruled that Moscow should refuse to pay the colossal sum if it loses the latest ongoing appeal over Yukos. The case is being litigated under the terms of the Energy Charter Treaty, which Russia signed up to but never ratified, with foreign courts insisting they still have jurisdiction. The Russian judges claim that entering into the pact and supposedly agreeing to foreign mediation broke a fundamental provision of the country’s constitution.

Specifically, judges said, subjugating national laws to international rulings is against those principles, and therefore, when Boris Yeltsin’s government entered into the treaty in 1994, it did so on an invalid basis. No leader, the court claimed, has the right to trade away the sovereign right of self-determination, or to “challenge the competence” of Russian courts.

If the judges in The Hague eventually uphold the decision to hand the multibillion-dollar sum to those who lost cash after the collapse of Yukos, stumping up the funds would therefore be optional, the ruling insists. This decision would effectively cut Moscow free from any obligations to foreign courts under the terms of treaties it might have signed, and acting on it would put the country on a collision course with the West, which could look to take unilateral action to enforce any settlement.

In November, a parallel litigation brought by Yukos’ ex-shareholders was temporarily thrown out of court in the US. A judge in Washington accepted the Russian petition to suspend proceedings while the case was being heard in the Netherlands. The claimants had asked that American authorities demand a $7 billion security bond from Russia, in case Moscow decided not to pay up.

The 30-page ruling rejected the idea outright, arguing “the Russian Federation is a sovereign country with economic tendrils that cross the globe, not an insecure potential debtor that must be required to post security lest there be no assets to seize at a later date.”

However, not all nations’ judicial systems have seen the issue in the same way. Last year, the former investors obtained a court order in the Netherlands to seize the assets of two well-known Russian state-owned vodka brands, Stolichnaya and Moskovskaya, in an attempt to secure damages. The trademarks had only been transferred to the Russian government a few months prior, after a separate legal battle with a private company for the marketing rights.

A subsequent appeal, however, overturned the shareholders’ handle on the firms, with a court in The Hague ruling that the move had been illegal. “It was time this frivolous action, for which there is no basis in the law, came to a halt,”said Joris van Manen, a lawyer representing the state company said. He added that Yukos shareholders would have to cancel a planned auction of the trademarks.

The tortuous legal battles being fought on both sides of the Atlantic are expected to come to a head early next year, when the Dutch court returns its final verdict. However, there are no guarantees that Russia won’t reach for the nuclear option in response to the astronomical bill, which weighs in at around the same amount as its annual military budget. If it does, asset seizures and even sanctions could be on the table.

Speaking ahead of a national vote on the constitution last year, President Vladimir Putin set out in no uncertain terms that he views domestic laws as more important than overseas rulings, a position that he shares at times with leaders in the US and China. “I believe that the time has come to make some changes,” he said, “which directly guarantees the priority of the Russian constitution in our legal environment.”

“The requirements of international law and treaties, as well as decisions of international bodies, can act on the territory of Russia only to the extent that they do not entail restrictions on the rights and liberties of man and citizen, and do not contradict our constitution,” Putin added. Measures that would put Russian law ahead of demands from overseas were later adopted after the vote.

It wouldn’t be the first time that Moscow had found itself insisting it would put its own laws before international rulings. Earlier this year, the European Court of Human Rights (ECHR) ordered the country to release jailed opposition figure Alexey Navalny. The anti-corruption activist is serving time in prison after being found guilty of breaching the terms of a three-and-a-half-year suspended sentence for fraud.

In a statement, the Strasbourg-based court said “a Chamber of Seven judges of the Court decided… to indicate to the Government of Russia… to release the applicant. This measure shall apply with immediate effect.”

However, the country’s Justice Ministry rejected the calls outright, saying that they were “unenforceable” and unprecedented for a number of reasons. “Firstly, this is a clear and gross interference in the activities of the judiciary of a sovereign state. Secondly, this demand is unreasonable and unlawful, since… it does not include a single rule of law that would allow the court to make such a decision.”

The ECHR had previously attempted to strike down the 2014 conviction under which Navalny was originally sentenced, relating to a 2014 scheme to defraud French cosmetics firm Yves Rocher. Again, Russia ignored the missive and prioritized rulings by its own courts.

However, it would be wrong to characterize Russia’s relationship with international law as entirely confrontational. While the country is often portrayed as a consistent violator of foreign rulings, its diplomats do actively engage in shaping and developing global legal frameworks. Even during the Cold War, Soviet delegates were instrumental in drafting a number of globally-binding agreements. Despite long-standing rumors that the country could pull out of organizations like the ECHR, it evidently still believes it has more to gain through membership.

Instead, it would seem that Russia’s current approach is to engage with international law as much as possible without letting it overturn verdicts from its own courts, where it could be perceived as undermining domestic rulings.

And the country isn’t alone in its reluctance to trade off sovereignty in exchange for a quiet life in diplomatic circles. The US, for example, has consistently refused to ratify membership of the International Criminal Court, which prosecutes perpetrators of war crimes and genocide. This stance is despite positioning itself as a leader in the field of human rights. Notably, nations including Venezuela, Uganda, and Cambodia have fully signed up. In another parallel, Russia withdrew from the agreement governing tribunals in 2016 after an unfavorable ruling over the Crimean Peninsula.

Sovereignty has also become a hot topic elsewhere in Europe. A poll published shortly after the UK’s Brexit referendum found that nearly half of all ‘Leave’ voters said the single biggest reason behind their decision was “the principle that decisions about the UK should be taken in the UK.” The idea of unelected officials and judges in Brussels making decisions from afar formed an effective attack line for the campaign to split from the bloc.

Russia may not be alone in wanting to put self-determination at the top of the agenda, but it has certainly been the most open about its approach. While the consequences of ignoring, for example, the ECHR’s decisions about Navalny have been virtually non-existent, its decisions about the $57 billion Yukos bill might prove to be more eye-catching in the West.