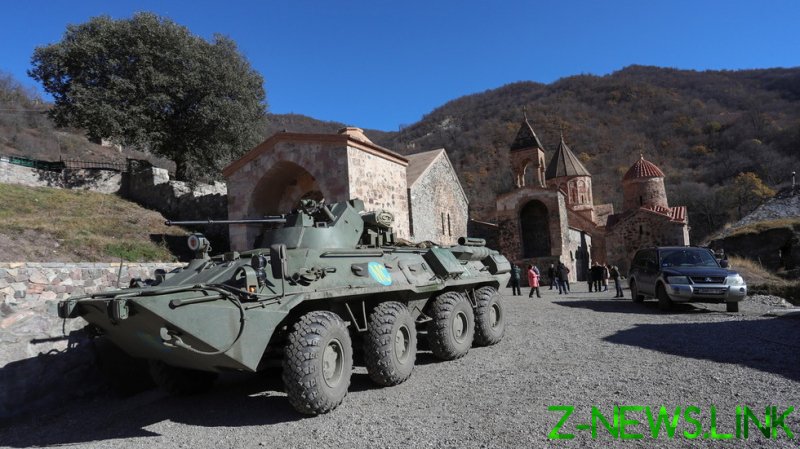 Both Russia and Armenia are part of the Collective Security Treaty Organization (CSTO), a mutual defense pact, similar to the US-led NATO bloc, made up of six former Soviet republics.

The move comes a week after Armenian Prime Minister Nikol Pashinyan asked Moscow for assistance. A day prior, three of his countrymen were killed in a cross-border altercation with Azerbaijani forces – a battle that only ended when Russia stepped in with a ceasefire agreement.

“Given the current situation, I think it makes sense to consider the question of stationing outposts of Russian border guards along the entire length of the Armenian-Azeri border,” Pashinyan said during a government meeting on July 29.

The newly arrived Russian troops are stationed in Tavush province, a region in the north of Armenia. Writing on Twitter, the Armenian Ministry of Defense revealed that the construction of facilities for the foreign border guards was underway.

Russian peacekeepers are already stationed in outposts near critical towns and villages as part of the Moscow-backed deal, signed last November, which paused the fighting in a brief but violent war between the two nations.

The conflict between Armenia and Azerbaijan in Nagorno-Karabakh re-escalated last September. The dispute is decades old, with both countries believing they have legitimate claims to the territory. The region is internationally recognized as part of Azerbaijan, but primarily populated by ethnic Armenians. Baku considers the enclave to be illegally occupied by Yerevan, which still controls a large amount of its land.

On November 9, Moscow oversaw a ceasefire between the two parties, which determined that Azerbaijan could keep the areas of Nagorno-Karabakh regained during the conflict. Armenia also agreed to withdraw from neighboring regions, with both countries agreeing to allow Russian troops to be stationed in the region.