Home / Video news / Russia scored a fake on the meeting of Putin with the leader of China. Video

Russia scored a fake on the meeting of Putin with the leader of China. Video 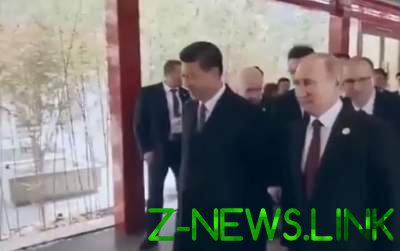 The creators of the story made a funny error when mounting.

On TV channel “Russia 1” there was a story about the meeting of Russian President Vladimir Putin with the leader of China, XI Jinping: in addition to the General promotional tone of the story, its creators have made a funny error when mounting.

The video came out in the program “Evening with Vladimir Solovyov”.

One of the highlights of the plot, the VoiceOver says that the Chinese are supposedly “fighting for a place next to Putin.” The proof of this demonstrate two representatives of the Chinese delegation, which, being next to the President of Russia, can not divide place. However, the video clearly visible white outlines around their figures. According to many commentators, this clearly demonstrates that the Chinese just “was photoshopped in” to Putin.

“Putin’s propagandists gash sucked out of the void the story of the Chinese who, supposedly, “fighting to stand next to Putin.” Took them and just was photoshopped in, with mediocre and clumsy” – wrote on his Twitter page blogger under the name Vitauskas.