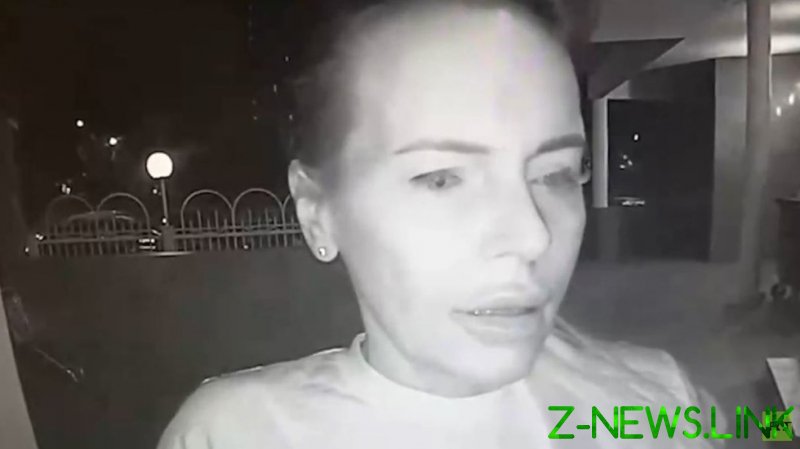 Russia’s Federal Security Service (FSB) has made public a video of Ukrainian national Natalya Vovk, identified as the prime suspected in Saturday’s car bombing that killed journalist Darya Dugina in Moscow. The footage published Monday shows Vovk and her teenage daughter entering Russia, inside the building where Dugina lived, and leaving the country in haste.

Vovk, 43, was named by the FSB on Monday as the prime suspect in the assassination of Dugina. The Ukrainian national arrived in Russia on July 23, using Donetsk People’s Republic license plates to avoid scrutiny. While in Moscow, she swapped the plates on her Mini Cooper to those of Kazakhstan, a friendly former Soviet republic. On Sunday, after the bombing, Vovk drove to Estonia with Ukrainian plates, the FSB said.

Photos of the different license plates were included as part of the video presentation.

Authorities also said Vovk may have used her teenage daughter as cover, to move around Russia more easily. She rented an apartment in the same building where Dugina lived, and was captured on the doorway camera.

A photo ID of Vovk in the uniform of the Ukraine’s National Guard was published in April on the Russian internet, as part of a doxx of neo-Nazi “Azov” regiment members. It lists her surname as Shaban – the surname her daughter used when entering Russia, according to the FSB.

Dugina, 30, was killed on Saturday evening after attending a conservative family festival near Moscow with her father, philosopher Aleksandr Dugin. Vovk allegedly planted an improvised explosive device under the Toyota SUV that belonged to Dugin, who may have been her intended target.