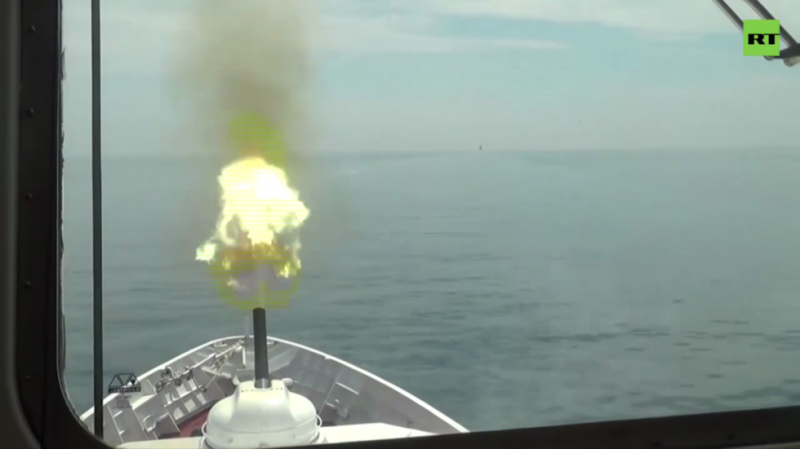 The short clip, released on Thursday by Russia’s Federal Security Bureau (FSB), shows the confrontation between a patrol ship and the ironically named Royal Navy destroyer that sailed past Cape Fiolent, near the Crimean city of Sevastopol on Wednesday.

“If you don’t change course to starboard, I will fire,” the coast guard vessel officer radioes the British destroyer, warning the warship it was about to violate Russian territorial waters.

“You must immediately leave the territorial sea of Russian Federation,” comes the second warning. Then the captain is heard issuing the orders, in Russian. “Fire warning shots. DO NOT, repeat NOT hit the Defender. Confirm, over.”

Moscow has also claimed that at least one interceptor aircraft also dropped bombs onto the Defender’s course, careful not to hit the invading ship.

On Wednesday, London officially declared that “no warning shots have been fired at HMS Defender,” and the ship was simply “conducting innocent passage through Ukrainian territorial waters in accordance with international law.”

The UK considers Crimea – a historically Russian peninsula that was reabsorbed by Moscow following a 2014 referendum – to be still part of Ukraine. The strategically vital region, which is overwhelmingly ethnically Russian, was signed over to Kiev, in 1954, while both countries were part of a union state. The move was made for both practical and symbolic reasons by Nikita Khrushchev, who had grown up in the Donbass.

The supposedly “innocent passage” was “a deliberate move to make a point to Russia,” according to Jonathan Beale, a BBC military correspondent who was on board the destroyer.

The Royal Navy’s provocation came just a day after Russia marked 80 years since the invasion of the Soviet Union by Nazi Germany and its allies in 1941. Speaking with reporters on Thursday, Deputy Foreign Minister Sergey Ryabkov said that Russia takes its territorial integrity seriously.

“We can only appeal to common sense and demand respect for international law,” Ryabkov told reporters. “If that doesn’t help and if our colleagues don’t understand, we may not only bomb on course, but also on target.”