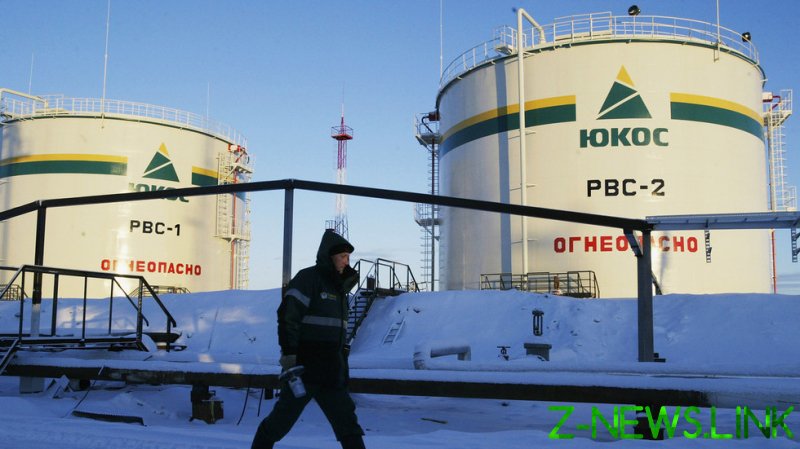 The office of the country’s Prosecutor General said on Thursday that it does not acknowledge the validity of the decision, by the International Arbitration Court in The Hague. Authorities said that Russia would “appeal the decision without fail,” questioning both the basis of the judges’ jurisdiction and the claims themselves.

Earlier that day, representatives of the shareholders who lost cash when the former oil and gas conglomerate collapsed claimed victory in legal proceedings that handed them a total of $5 billion in compensation. A separate claim, for a total of $57 billion, is currently being heard by the Supreme Court of the Netherlands.

The ex-shareholders say that the Russian government “expropriated” the assets of Yukos when the firm was bankrupted by a multi-billion dollar tax bill. The private company had been formed after a controversial auction of state assets following the fall of the Soviet Union, and quickly became one of the world’s most valuable companies despite investors picking it up for a fraction of its worth.

The founder of the energy empire, Mikhail Khodorkovsky, later served time in prison on fraud charges, which he claims were a response to his political activity. However, the London-based businessman asserts he has no direct interests in the lawsuit, and the case has been brought by other financiers including influential businessman Leonid Nevzlin.

Russia has insisted that the judgements are “politically motivated,” and in December the country’s Justice Minister, Konstantin Chuychenko, told journalists that the case was part of a “legal war that has been declared on Russia.” He added that “Russia must adequately defend itself and, sometimes, even attack back.”

Moscow denies the charges and says that foreign courts have not considered that national laws around fraud and other wrongdoing might have been broken. However, in December, the Constitutional Court, one of Russia’s highest judicial authorities, ruled that Russia could refuse to pay any settlement imposed by Dutch judges. The basis for the arbitration is the terms of the Energy Charter Treaty, which Moscow signed but never ratified.

In their adjudication, the judges found that while the country’s government of the day began the process of signing up to the pact in 1994, they did not have the authority to make national laws inferior to international agreements, or to “challenge the competence” of Russian courts. Therefore, the jurists conclude, adhering to the Dutch court’s demands would be “unconstitutional.”

There have, however, been a number of attempts to confiscate Russian state assets in case the country refuses to honor any eventual settlement. To date, though, these have ultimately been rapidly overturned by courts. The case is expected to be settled by the Netherlands’ highest court later this year.