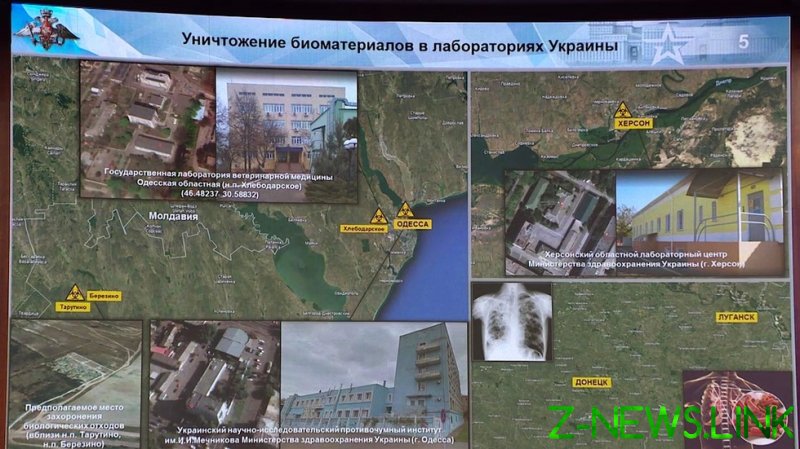 Moscow believes that laboratories in Ukraine funded by the US military were making biological weapons components, but that local staff was being kept in the dark about their research, a senior Russian general said on Thursday.

Lieutenant-General Igor Kirillov, who commands the Nuclear, Biological and Chemical Protection Forces of Russia, presented documents and imagery showing why the military has come to such a conclusion.

“We believe that components of biological weapons were being made on the territory of Ukraine,” said Kirillov.

He noted that the documents he was presenting “have the signatures of real officials and are certified by the seals of organizations,” for those journalists and experts in the West doubting their veracity.

One document, dated March 6, 2015 confirms the “direct participation of the Pentagon in the financing of military biological projects in Ukraine,” Kirillov said. The US officially funded the projects through the Ukrainian Ministry of Health, according to the Agreement on Joint Biological Activities. However, the evidence shows that the real recipients of some $32 million in funds were Ukrainian Defense Ministry laboratories in Kiev, Odessa, Lvov and Kharkov.

These facilities were chosen by the US Department of Defense’s Threat Reduction Administration (DTRA), and the contractor Black and Veatch, to carry out the U-P-8 project, aimed at studying the pathogens of Crimea-Congo hemorrhagic fever, leptospirosis, and hantaviruses, Kirillov said, pointing to a slide with the Pentagon’s request.

“From our point of view, the interest of US military biologists is due to the fact that these pathogens have natural foci both in Ukraine and in Russia, and their use can be disguised as natural disease outbreaks,” the general said.

According to the evidence, the labs isolated three bacterial pathogens (causing plague, brucellosis and leptospirosis) and six families of viruses, including coronaviruses, all of which were drug-resistant and spread rapidly from animals to humans. A number of documents confirmed the samples taken in Ukraine to other countries – Georgia, Germany, and the UK.

Kirillov showed official documents confirming the transfer of 5,000 samples of blood serum taken from Ukrainian citizens to the Pentagon-backed Richard Lugar center in Tbilisi, Georgia. Another 773 biological assays were transferred to the UK, while an agreement was signed for the transfer of “unlimited quantities” of infectious materials to the Friedrich Loeffler Institute, Germany’s leading center for animal diseases.

However, the analysis of the obtained evidence suggests that Ukrainian specialists were not aware of the potential risks of transferring these materials, and may have been kept in the dark about the true goal of the ongoing research, Kirillov noted.

Documents from Project P-781, a study of ways of transmitting diseases to humans through bats, showed it was carried out by the Kharkov laboratory and the Lugar Center in Georgia, but Ukraine received most of the $1.6 million grant for the project. Kirillov said that “systematic” research in this area has been carried out since 2009, under the supervision of US specialists – referencing projects P-382, P-444 and P-568.

As one of the key people involved, Kirillov named the head of the DTRA office at the US Embassy in Kiev, Joanna Wintrol.

“Maybe she’s worth talking to, journalists?” he said.

Wintrol left Kiev in August 2020. In her parting interview, she insisted no US scientists worked in Ukrainian biolabs and accused Russia of spreading “false information” about the program.

Kirillov pointed to mass outbreaks of avian flu in Russia and the EU in 2021, causing billions in damages, while the Kharkov Institute of Veterinary Medicine was studying wild birds as transmission vectors and assessing conditions under which the spread could cause economic damage and food insecurity. Evidence now shows the institute collected strains of avian flu capable of jumping species, Kirillov said, calling for an international investigation into the matter. 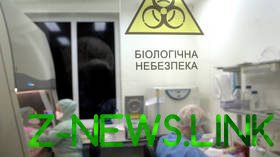 Some of the documents at the Kherson laboratory appear to be missing and may have been destroyed, Kirillov said, suggesting it was related to the 2018 outbreak of a mosquito-borne parasitic disease in that region, and a possible cover-up.

Four cases of dirofilariasis were detected in February that year, which is not typical for mosquito life cycles, the general said. Pentagon representatives visited the local hospitals in April, collecting medical records and getting briefed on the epidemiological investigation. However, “no documentary evidence regarding this outbreak has been found in the Kherson laboratory,” leading the Russian military to believe that “the urgency of destroying such documentary evidence is explained by the desire to prevent access to them by Russian specialists.”

There was also an outbreak of drug-resistant tuberculosis in 2018, among the citizens of the Donetsk and Lugansk People’s Republics, with 70 cases detected around the village of Pesky – on the frontline with Ukrainian troops – alone.

“This may indicate a deliberate infection, or an accidental leakage of the pathogen from one of the biological laboratories located on the territory of Ukraine,” Kirillov said.

The Russian general brought up the long history of US conducting banned biological research in other countries, noting as an example that in 2010 Washington apologized for syphilis experiments in Guatemala.

“We will continue to examine the evidence and inform the global community about the illegal activities of the Pentagon and other US government agencies in Ukraine,” Kirillov said.