Russia is still not too late to make concessions to Japan 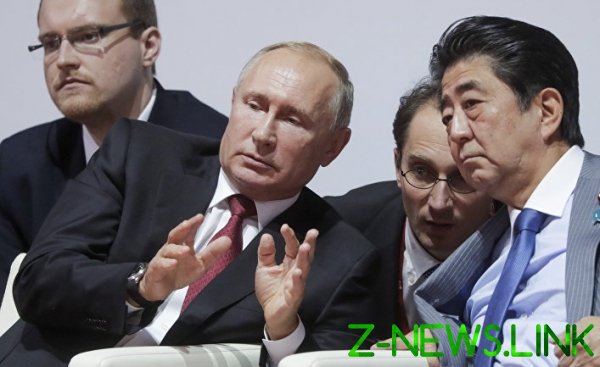 Time, to change its tough stance on Japan, Russia’s less – before leaving Abe as Prime Minister remained about a year. If Moscow will go on some concessions, a special approach Abe to Russia cannot be called a failure, that might convince the successor of Abe to continue his policy

For several years Russia’s relations with Japan are developing surprisingly advantageous for Moscow way. Despite the overall confrontation with the West, Tokyo falls asleep its all new proposals of economic and political cooperation, although the Russian side should not be any counter — concessions- on the contrary, Moscow’s position on the Kuril Islands only became tougher.

It could be called a success in Russia, but only tactical. And in the long term, the current rate for Moscow is fraught with serious strategic losses in the Japanese way.

The current Prime Minister of Japan Shinzo Abe — the Japanese Pro-Russian leader in the history of the relationship. During the years in power, he met with Vladimir Putin 27 times, and since April 2013 as many as 11 times was in Russia visiting, including four traveled to the Eastern economic forum in Vladivostok.

Abe has proposed an ambitious plan of cooperation with Russia of eight items, created a special post of Minister for relations with Russia, and made clear that the dispute about the Kuril Islands willing to limit themselves to two Islands, although Japan has traditionally claimed by four. Never before Japanese leaders had such a friendly stance towards Moscow — especially in the period of confrontation with Russia, the main ally of Japan — the United States.

Of course, Abe is doing all this not out of sentimentality. He has two clear goals: to have time to resolve the territorial dispute with Russia, while he was in power, and to weaken Russia’s ties with China, which Tokyo believes the main threat to Japan. Although in General the first goal is only a necessary condition for the successful achievement of the second.

However, despite the efforts of Abe, Japan failed to advance any of these goals. The sides were no closer to agreement on the status of the disputed Islands, and the cooperation of Russia and China is only getting stronger, including in the military sphere.

We can say that the problem is Abe, not Russia — he miscalculated, naively believing that if Putin will offer friendship and economic cooperation, Moscow will make concessions on the Kuril Islands. But in the future, the failure of Abe may turn to Russia considerable difficulties in relations with Japan because the Japanese Prime Minister did not get the desired results, but was humiliated.

In response to friendly gestures Tokyo Moscow is in no hurry to comply with in diplomacy the principle of reciprocity. For example, if Abe will attend the Victory parade of June 24, it will be the twelfth visit of the Japanese Prime Minister to Russia in 2013. Putin during this time visited Japan only twice, and once because of the G20 summit in Osaka in 2019.

The main Putin’s visit to Japan took place in December 2016, when Abe took the Russian leader in his hometown in Yamaguchi Prefecture. Before Abe never invited other heads of state to his hometown, even the President of the United States.

Putin, in response to this special approach late in Yamaguchi Prefecture for almost three hours, and this in a country where they appreciate punctuality. Moreover, despite the fact that the Japanese side was obviously configured for a breakthrough, the Russian President showed that there is something serious to discuss, saying that “it is better not to tired” during the negotiations.

When Abe visited Russia, it honors, on the contrary, was quite a bit. For example, in September 2019, when he arrived in Vladivostok at the Eastern economic forum, Putin decided to use this moment to make a video to open Russia’s largest fish processing plant on Shikotan.

For Japan, this claim to the Kuril island, it was completely unacceptable — because just one year earlier, in November 2018, Abe and Putin agreed to intensify negotiations on a peace Treaty based on the joint Declaration of 1956. And the Declaration expressly stated that Moscow agrees to transfer to Japan of Shikotan and Habomai after a peace Treaty.

The last straw for Japan was the decision of the Kremlin to amend the Constitution the amendment about the inadmissibility of actions and appeals, involving alienation of part of the territory of the Russian Federation. Sources in the presidential administration told the Japanese media that Japan has nothing to worry about, because the amendment allows talks about “the delimitation, demarcation, redemarcation of the state border.”

But it is clear that the amendment will inevitably become another obstacle to the already unlikely to resolve the territorial dispute with Japan. And included it without any consideration for relations with Japan, and generally unnecessarily — just to get additional votes in the plebiscite on additional presidential terms for Putin.

Most likely, a large part of Russian society supported the strong position of the Kremlin in its relations with Japan. Yes, and it would be strange to sympathize naivety Abe — he is an experienced politician, should understand that. Nevertheless, Russia should take into account that the humiliating failure of the Abe can permanently poison the bilateral relations that complicate the life of both countries.

The term of office of Abe comes to an end. It expires in September 2021, and possibly earlier, if the popularity of Abe will continue to fall because of the economic consequences of coronavirus. The new Prime Minister will take into account the successes and failures of Abe, therefore, is unlikely to continue friendly policy towards Russia.

Most likely, the next head of the Japanese government will be Fumio Kishida. The post of foreign Minister in the 2012-2017 years he faithfully followed the course Abe against Russia, although it was not fully agree with him. For example, after leaving government Kishida stated that he does not understand the decision to remove Abe from the “Blue book” proposal, which explicitly States that “the Northern territory” (that is, the Southern Kuril Islands) belong to Japan. “Blue book” is published annually and, in fact, is a foreign policy doctrine of Japan.

Another potential candidate for Prime Minister, Shigeru Ishiba. He held the post of Minister of defense in 2007-2008. Ishiba also a supporter of a tougher line in relations with Russia. For example, Abe has insisted that Japan’s government ceased to be called the disputed Islands “… ancestral territory under illegal occupation by Russia”, and Ishiba continues to use this wording.

To mitigate the later

Reversing course in Japan’s relations with Russia — is not this unimportant event, as it may seem. Yes, Abe’s plan for economic cooperation of eight items did not give impressive results, but was far from useless. For example, in September 2019, the Japanese consortium has agreed to purchase 10% of shares of “Arctic LNG 2” from NOVATEK. The consortium includes Mitsui & Co and the Japanese national Corporation for oil, gas and metals (JOGMEC), but without the support of the Japanese government, the transaction would not have taken place — 75% of the value of the shares covered state budget.

The plan was and political benefits. For example, Japan has not supported Washington’s attempts to isolate Russia and did not impose serious sanctions after the Ukrainian crisis 2014 and sent Russian diplomats following the assassination Skripal in Britain in 2018.

Despite all the problems, Japan remains the third economy in the world and retains strong positions in important technological sectors. Many Japanese companies have accumulated huge financial reserves. With such data Japan could become an important source of investment for development of the Russian Far East, and also to balance the growing Russian dependence on China in conditions when warming with the West is unlikely.

Therefore, for Russia, it’s not too late to make some concessions Abe, which will allow him to argue that his course was not failure is at least partly continue. Of course, this does not mean that Russia should abandon the Kuril Islands — there is much less radical steps.

For example, Russia may extend visa-free regime, which is now used previously lived on the Kuril Islands, the Japanese to travel there by ship every summer. This year’s planned trip was postponed due to the coronavirus that causes them is to restore when the situation normalizes.

The space for cooperation in joint economic activities on Southern Kuriles. In 2016 Putin agreed to start talks on this subject, but it’s been four years, but concrete results are still there. The fact that Russia insisted that the projects can only be carried out under Russian jurisdiction. But Japan could not accept because it would mean recognizing Russian sovereignty over the Islands. To solve the problem would be more flexible and compromise approach that would allow to implement joint projects, not involving them in issues of sovereignty.

Such steps would be great right now — the economy of the Kuril Islands will not prevent additional support at a time when falling oil prices reduced the budget of the Sakhalin region. But more importantly, what small concessions to Russia might soften the disappointment and irritation from the failed rapprochement with Moscow, which may prevail in the Japanese government following the resignation of Abe.