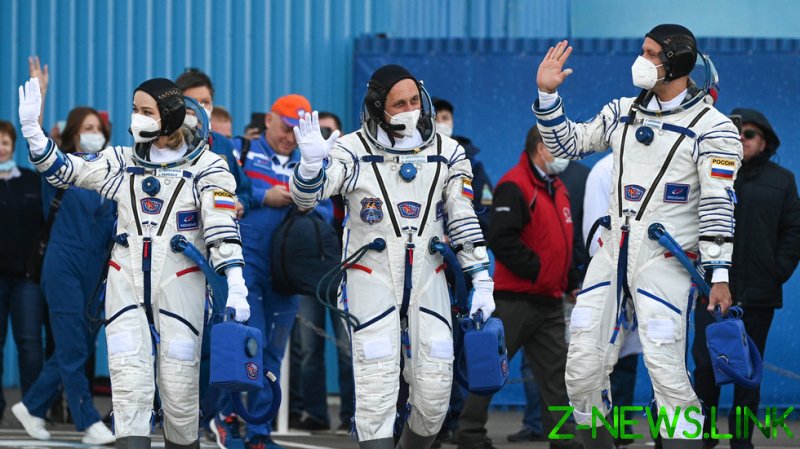 I regret to inform you that the Russians have once again beaten us to the punch in the space race, this time by shooting the first feature film in space, and I’m deeply concerned that all Americans’ precious bodily fluids are now in grave danger.

Let me explain, Mandrake. For my entire life as a proud American, I was dutifully marinated in establishment media propaganda that long ago indoctrinated me with the holy belief that all things Russian are nefarious and evil. It was through this lens of star-spangled truth that I read the news that Russia had successfully sent actress Yulia Peresild (‘Battle for Sevastopol’) and director Klim Shipenko to the International Space Station in order to shoot a feature length film in space, something never before accomplished.

What makes this space-based movie shoot for a new film ‘The Challenge’, which tells the tale of an emergency mission to the International Space Station to tend to an ailing cosmonaut, all the more villainous is that it beat Hollywood legend Tom Cruise in the moviemaking-space race, as the ‘Mission: Impossible’ star had hoped to be the first to pull off the stunt with the help of our friends at NASA and SpaceX.

Russians have long been scoring firsts when it comes to the space race against us, Mandrake, as they put the first satellite (Sputnik), first dog (Laika), first person (Yuri Gagarin) and first woman (Valentina Tereshkova) into space and also did the first spacewalk (Alexei Leonov). But none of those victories came at the expense of Tom Cruise. None of them!

Yes, we did beat those commie b*****ds (and we all know they’re still commies because a commie leopard can never change its spots!) by having Stanley Kubrick shoot a fake ‘moon landing’ in Burbank…oops…that’s the pure-grain alcohol talking, please disregard that last statement. What I meant to say is that at least we beat those Rooskies to the moon. But still, Mandrake, I can’t help but feel that we’ve taken a hit on this one.

To add to my aggravation, The New York Times is reporting that Dmitry Rogozin, head of the Russian state space agency Roscosmos, “hopes the mission will make ‘a truly serious work of art and a whole new development of the promotion of space technologies,’ in order to attract young talent to Russia’s space program.”

A movie as a ‘serious work of art’? How un-American can you get?

Furthering my irritation is that NBC News reports that Rogozin said, “Movies long have become a powerful instrument of propaganda,” and that he hoped this new film would “counter the West’s attempts to ‘humiliate’ the Russian space program.” Can you believe he just openly admitted that this commie Russian movie is propaganda, Mandrake?

Personally, I’m proud to live in a free country that doesn’t manipulate movie audiences with mindless militarism and nationalist narratives meant to propagandize and indoctrinate them. By the way, Mandrake, did I ever tell you that my favorite Tom Cruise movie is ‘Top Gun’? I loved it when he slaughtered those MiG flying Soviet sons of bitches at the end.

Mandrake, understand this, as a devoted fan of Rachel Maddow and a devout consumer of American corporate media, I’m smart enough to connect the dots regarding this Russian movie-making space venture and can no longer sit back and remain quiet about the true nature of this devious mission.

I confidently declare to you that this mission is about using a mysterious microwave weapon; the same one deployed against our noble and loving intelligence agency operatives in Havana and across the globe, to sap and impurify all Americans’ precious bodily fluids.

Just like the mainstream media, I have no proof or any clear understanding of the plan, or how it works, or if this mysterious microwave weapon that impurifies American’s precious bodily fluids even exists, but that won’t stop me from acting against it.

To counter this cinematic microwave space attack I believe we need to put into motion Operation Starlet Starship. If you’ll remember, Operation Starlet Starship gathers together every nubile young starlet in Hollywood, along with a select group of government and military leaders, like us, as well as Tom Cruise, and sends us into space so that we can run a breeding program in order to repopulate the US after the microwave weapons attack wipes out all precious bodily fluids of every American.

I believe it was Buck Turgidson who came up with the idea of Operation Starlet Starship, and he recommended a Starlet to Stodgy Old Man ratio of 10-to-1. Wise old bird that, General Turgidson.

If we can’t round up the requisite number of starlets, I suppose another option is to just get Tom Cruise up to space immediately and have him shoot an all-American, non-propaganda movie where he kills some evil commie cosmonauts as he dismantles their microwave weapon before it impurifies all our precious and vastly superior bodily fluids.

I’d love to see that movie, Mandrake, almost as much as most Americans would want to see all of Hollywood shot into deep space and never seen again. Hopefully we can get Tom Cruise into space before the Russians’ cinematic space plan gets too far advanced!