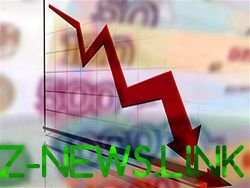 In the first quarter, Russian GDP grew only by 0.5% yoy, which was worse than expectations of the authorities. These are the preliminary estimates of Rosstat. This year in Russia may start the economic recession is the largest after the crisis of 2008-2009, economists warn. According to their estimates, QoQ failure was a record for the past approximately 10 years. The main reasons they include first of all tax innovations of the government.

That is, the crisis is largely man-made.

Rosstat has published preliminary estimates for GDP growth for the first quarter. Economic growth was only 0.5% in annual terms, after rising in the fourth quarter of 2018 2.7%.

At the end of last week receiving estimates from Rosstat, the MAYOR explained that “the overall slowdown in GDP growth was expected and due to the weakness of domestic demand to the increase in the tax burden”. This refers to the value added tax (VAT).

But officials seemed to not give such trends of special significance. Moreover, some of them make statements that may seem surprising, because they contradict what is happening in the economy.

“The current year is the first year set up and implement national projects. Economic growth for the first quarter folds in slightly above our forecasts,” – said, for example, the first Vice-Premier, Finance Minister Anton Siluanov President Vladimir Putin at the may 8 meeting of the Council for strategic development and national projects. That is, as we see in some ministries believe that the economy is growing even better than necessary.

What officials are not saying is about the risks of the offensive in the new Russia, the largest after the 2008-2009 crisis. According to a rough estimate of the Director of the analytical Department of “Loco-invest” Cyril Tremasova (previously worked in the Ministry of economic development), Rosstat recorded a decline in annual GDP growth means that “in the first quarter relative to the previous one with the elimination of the seasonality of the economy could be reduced by about 1.6%”.

“This is the biggest quarterly drop for all the time after the crisis of 2008-2009. Neither the collapse of oil in 2014, or sanctions, are unable to cause the same collapse of the economy that we have provided for themselves by increasing the taxes,” says Tremasov Telegram-channel MMI.

Among other reasons, which could adversely affect economic growth, the economist warned of “a sharp deterioration in the economic situation in Western Europe and Turkey, led to a drop of export of the Russian gas in these areas; the reduction of oil production under OPEC deals+; huge capital flight; tight fiscal policy”.

“All the factors in the current (second. – “NG”) quarter continue to act in the same direction… I am Afraid that in the current quarter will again be recorded negative economic growth in the first quarter with the elimination of seasonality. This will mean that the economy is in recession – a GDP contraction for two consecutive quarters,” warns Tremasov.

However, some economists believe that the recession in the country is not just about to begin, and already in full swing. Thus, the economist Andrei Illarionov, based on data from the Center for development HSE Rosstat, reported that the country has entered a new, fifth recession. In General, in the economy it started six months ago, in transport and in trade – nine months ago, in construction – seven months ago, he listed.