Russia intercepted the approaching to its borders with American aircraft 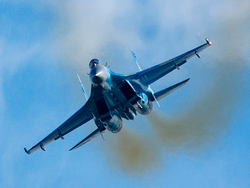 American reconnaissance aircraft P-8A Poseidon close to the borders of Russia in the Black sea, to intercept raised the su-27. About it reports RIA Novosti, citing the Russian defense Ministry. It is noted that control of airspace was detected aerial target over neutral waters, which was approaching the border of Russia. After that, the crew of the Russian su-27 approached to a safe distance and recognized the American P-8A Poseidon, which is then turned in the other direction. Violations of the state border during the incident were not allowed. It is known that in the Black sea at the moment are the teachings of the NATO-Ukraine Sea Breeze. The Ministry of defence said that the Navy keeps track of ships and aircraft. On the eve of Russian fighter jets also intercepted the American and German reconnaissance aircraft. We are talking about the maneuvers of the aircraft P-8A Poseidon and U-2S of the U.S. air force and P-3C Orion of the German air force in two places — over the Black sea and the Baltic.