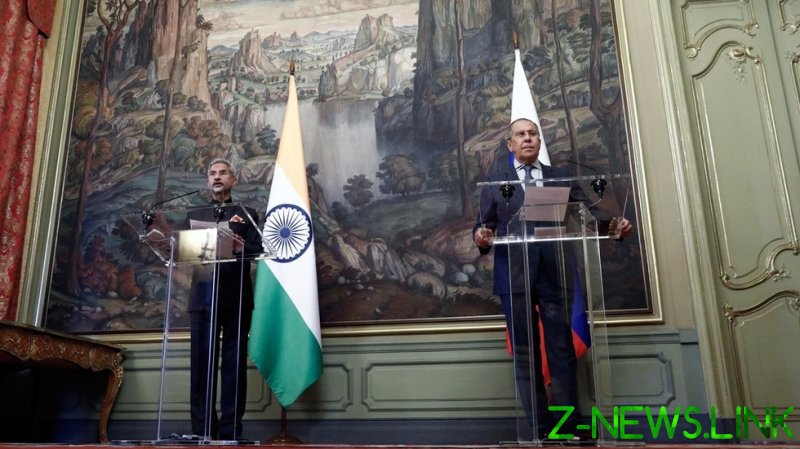 During a joint press conference in Moscow on Saturday, Indian Foreign Minister Subrahmanyam Jaishankar and his Russian colleague Sergey Lavrov also outlined the plans on cooperation in the field of vaccine production.

“I am sure that the Russian vaccine production in India would be a major contribution to the global efforts to fight this disease,” Lavrov said. Jaishankar noted that the agreements reached in this area only underscore the strong ties the two nations demonstrated during the pandemic.

Russia’s Direct Investment Fund has struck deals with India’s major pharmaceutical companies to start manufacturing the Sputnik V vaccine, and the two nations are now paving the way for the mass production of the jab after Indian companies successfully passed the trial stage.

Jaishankar thanked Moscow for the assistance during the latest wave of the virus, which saw record death rates in India. Since May, Russia has sent several major shipments of medical aid to India, including multiple batches of the Sputnik V vaccine, as well as lung ventilators and oxygen tanks.

Russia and India should not only cooperate to protect their own people against the virus, but also help other countries fight the disease, the Indian diplomat added. This would take the form of assistance to developing nations that are struggling to launch their own vaccination campaigns, according to Lavrov. Moscow and New Delhi also plan to discuss the ways to facilitate cross-border travel, based on Covid testing results and mutual recognition of vaccination status.

“I believe that such an agreement can be reached,” the Russian minister said, adding that it could set a positive example amid attempts by some European countries to “discriminate” against certain vaccines, such as those developed in Russia and China.

India is wary about selective recognition of vaccines and mandatory vaccination certificates for travelers, and believes that if people are “tested before travel and tested on arrival, it is a good enough basis for travel,” Jaishankar said.

“Russia and India are against any attempts to politicize this situation,” Lavrov added, describing it as an example of “unfair competition.”

While the Covid-19 pandemic dominated the meeting, it was hardly the only topic discussed. Lavrov and Jaishankar touched upon economic ties, military and technical cooperation, as well as space exploration. The Indian minister said Moscow is New Delhi’s “most important and most trusted partner” in space.

The diplomats revealed that India is on the verge of starting talks on a free trade zone with the Eurasian Economic Union (EAEU) – an economic bloc that includes Russia and several other former Soviet republics, such as Armenia, Belarus, Kazakhstan and Kyrgyzstan.

Ditching the US dollar in mutual transactions might very well become part of the talks’ agenda, Lavrov added, since this process is already ongoing within the EAEU, and India could have “quite good starting positions here.” The talks are set to start as soon as the pandemic situation allows it.