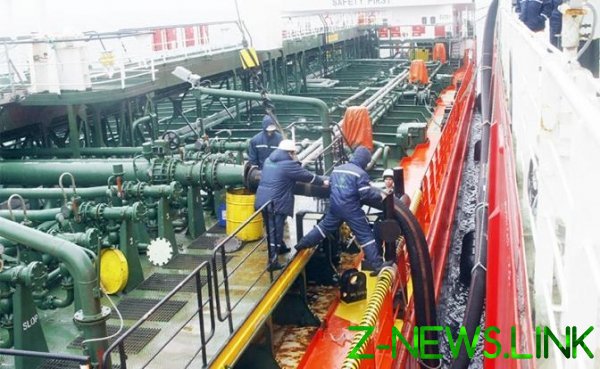 Last Saturday all the world’s media reported the alarming news — emergency meeting of countries involved in OPEC+, may be postponed for three days — from 6 to 9 April. Although the price of oil in recent days has grown up, not the fact that they will not roll down. All will depend on what the outcome of the negotiations.

According to news Agency S&P Global Platts, work on a new agreement, OPEC+ is taking into account the fact that production must be cut by a record 10 million barrels per day. The negotiators already have made a “flurry of calls” to exchange offers, but it is unclear how it will be distributed for this amount. But there is no answer to the main question: are you ready to join the deal, the United States?

However, the preliminary readiness of Russia, USA and Saudi Arabia to put an end, even great reservations, an oil war is not bad.

But even greater importance today is the “Chinese factor”.

That the chief beneficiary of the oil Jihad will be China, last month, Bloomberg analysts said. In their opinion, XI Jinping could take advantage of low prices to catch the trade of “black gold” in the yuan. However, even with the payments in dollars for China, the benefits are obvious. How can low oil prices are good the world’s largest importer of energy?

Coronavirus in China is almost defeated, the economy is rapidly recovering after the collapse of the previous months. Businesses that return to work, you need energy. And here is a puzzle folds: the glut of oil on the world market is so great that it simply nowhere to go.

Potential buyers are not attracted to any low prices or big discounts offered the same as Saudi Arabia. Laden tankers converted to floating storage of oil, trump promises to oil companies to provide access to free capacity in the state strategic reserve. Not much hope for state assistance, American companies, meanwhile, have been trying to negotiate the rental of trains, in which you can store the “black gold”.

What option is working perfectly. Storage loaded railcar will cost $ 300 — $ 450 per month, or about $ 1.5 per barrel. “If you can get the crude oil is cheap enough that it’s worth it,” suggests chief Executive officer Tiger Tank Ernie Barsamian. However, “play” has Willy-nilly. Not buried back in the land of oil already extracted?

Russia has fared no better. According to reports in the Western press, no one in Europe wants to buy a record cheapened Urals. Similar difficulties face the Saudis, who sent the tankers in the “free floating” — final destination they do not have. There is only the hope that the market stabiliziruemost.

A ray of light in this Kingdom of darkness is China. Recently, the Agency Reuters citing traders reported that China bought record amount of Russian oil to 1.6 million tons. Of these, 800 thousand tons for delivery in the second half of March, and about 500 thousand with delivery in early April acquired Chinese Unipec. Another 300 thousand tons of Urals crude oil to China in the first half of April will bring the Shell (to do this, she rented a separate tanker). According to Reuters, the Russian oil industry workers in the conditions of a price war with Saudi Arabia this can be a “lifeline”.

China’s interest is quite logical. Cheap oil a lot of oil — need to take. Besides, the Saudis with Russians are about to shake hands, and then the ideal moment for consumers to be missed. “Futures have increased in price, since Beijing has instructed government agencies to begin to fill the government’s stocks after oil prices fell by 66% during the first three months of the year,” according to Bloomberg. That is, China is willing to absorb some of the excess volumes and even to involve commercial enterprise. If you fill to capacity and public and private reservoirs, the total volume of fuel would be equivalent to 180 days of net imports.

It would be possible to accuse China of trying to take advantage of the crisis to say: under the guise of buying energy at bargain prices. But in this case the exporters can only applaud the actions of Beijing. If not for China, the price carnage would have developed an even more apocalyptic scenario.

In General, hopes for a quick recovery of the world economy today is mostly associated with the Chinese. But even their heroic efforts can only partially mitigate the impact “of coronaries”. In the field of energy is the same law. The oil market can “recover” after the end of the epidemic, everything else just makes his suffering.

“Oil prices have not stopped, warns the founder of the company Vanda Insights in Singapore Vandana Hari. — Any sense of stabilization is likely to prove fleeting until we pass the peak of coronavirus in the United States and the most affected European countries”.

Another important aspect is the revival of the transaction OPEC+, which can take place in the near future. But the predictions here is difficult to do. Apparently, trump still doesn’t want to join a cartel agreement of Moscow and Riyadh: during a press conference in Washington he said that the reduction of production in the United States in negotiations with Russia and Saudi Arabia were discussed. It promises to be a major stumbling block.

If the White house will cave in, the coordination of all other details will be of a purely technical nature (although to arrange the reduction of such a huge amount like 10 million barrels a day, still not easy). If not, the rebound of oil be replaced by another deep drop — not even Beijing.

By the way, and for the Chinese consumer, Russia will have to compete. Exclusive right to export to China no player in the oil market has not, especially today, when competition among providers is heating up.

According to Reuters, along with the Russian deliveries to China are increasing and the United States. This is not surprising: in the first part of the bargain with Washington, Beijing has committed itself for two years to buy American goods worth $ 200 billion, and a quarter of the amount for energy.

Some experts initially doubted that this condition is met, and the coronavirus in General, all turned on its head. But the agreement itself has not been canceled. Trump will demand from si at least to show commitment to the spirit of the deal, integral part of which is the restoration of purchases of crude oil from the United States.

Saudi Arabia should not be discounted. Last year she took us sanctions, because of which exports fell Iranian oil to China. The shortfall in volumes successfully replaced the Saudis. What grade oil and how much is to soak the “sponge” of the Chinese reserve is an open question.