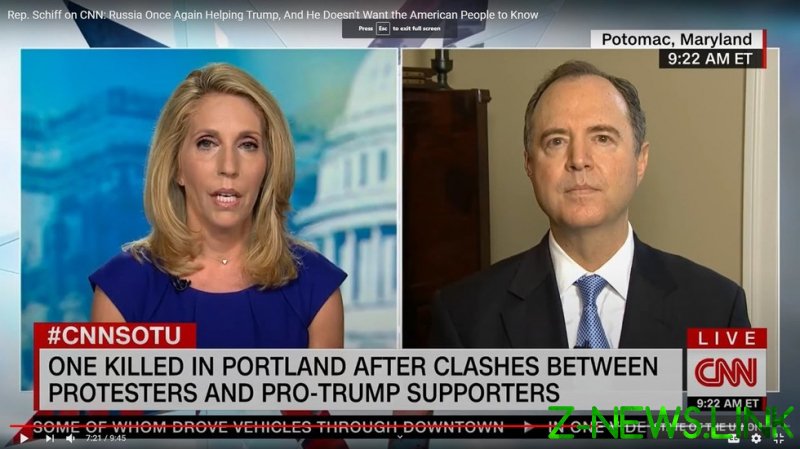 Schiff, the chair of the House Intelligence Committee, came to CNN for a round of Trump-bashing over the President’s remarks on how Director of National Intelligence (DNI) John Ratcliffe “got tired of” classified information being leaking from Congress. The DNI wrote last week to the California representative and his Senate counterpart, Marco Rubio, that his office will be informing lawmakers on election security through written reports rather than in-person briefings.

During the interview Schiff took time to denounce the President for what he described as an attempt to hide “the fact that the Russians are helping Donald Trump again” and declared that US intel “belongs to the American people”. With the election-meddling Ruskie bad guys introduced into the conversation, host Dana Bash mused on what other evil deeds they may be up to.

There were shooting deaths in Kenosha, Wisconsin and Portland, Oregon amid continued race protests in those cities, she said. “Do you have any reason to believe that Russia is trying to fuel some of the civil unrest in these cities via social media or other methods?” she wondered.

Schiff, who played a leading role in peddling the theory that the Trump campaign colluded with the Russian government to win the 2016 election, obliged to confirm that yes, the Russians “are once again doing their best in social media, in the overt media and other means to grow this division again.”

Blaming Russia for racial problems in the US is a time-honored tradition, so the CNN-Schiff duet hardly discovered new territory there. And the fact that the collusion theory crumbled after the Robert Mueller investigation failed to find evidence of it doesn’t seem to hurt his credibility with the sympathetic media.

Interestingly however CNN apparently didn’t find this last part of Russia scaremongering good enough to post it on its own website, cutting the interview short.

The channel’s coverage of the latest disturbances in the US has shown a lot of mental gymnastics. Last week’s caption on screen described the situation in Kenosha as “fiery, but mostly peaceful protests”, clashing spectacularly with the image of a reporter standing in front of burning cars and explaining how the night riots in the city differed from peaceful demonstrations during the day.

On Sunday, CNN analyst Chris Cillizza posted a piece explaining how Trump was disingenuous in calling the events in Kenosha and Portland riots rather than protests. A photo of riot police officers standing in front of a major blaze was chosen as a cover picture.

If the interview with Schiff is any indicator, people on CNN have found a way to explain away the inconvenient violence: Russia did it with memes.