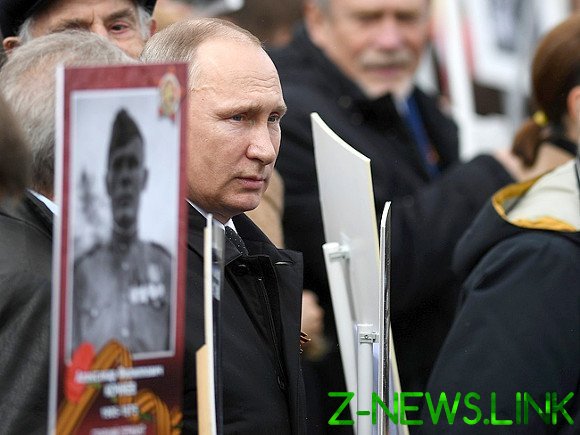 Vladimir Putin in Israel defends the Kremlin’s version of history of the twentieth century, which has become a cause for the succession of quarrels with neighboring countries.

Year 2019 ended historical “war” between the Kremlin and the Czech mayor of Prague district of Reporyje, who was going to install a monument to the soldiers of the so-called “Russian liberation army”. These specific “Vlasov” at the end of the war, turned his arms against the Nazis, which it had armed and supported the Czechs, raised in the Prague uprising.

Along the way, according to the mayor of the municipality of Reporyje, they protected his village, which was not then part of the Czech capital, from possible retaliation on the part of the SS. In Moscow, in response, said that Vlasov, along with other accomplices of the Nazis, was convicted by the Nuremberg Tribunal and put them to the sites for whatever it is not only an immoral act but also a violation of international law.

Next enemy, right before the New year, during the big press conference of Vladimir Putin did to Poland. The Russian President actually accused the pre-war government of this country anti-Semitism, and in passing said that he personally works in the archives and preparing for the 75th anniversary of the victory over Nazism an article about the circumstances of the war. About this article it was said several times, would certainly think about it and more. Until may, plenty of time, and Poland will give a lot of reasons.

Official Warsaw in matters of historical policy was nearly the most active of the Kremlin. It’s not quiet the Czech Republic, which in addition to elders Reporyje Pavel Novotny statements on historical topics recently did is that President Milos Zeman, and when the Russian diplomats have tried to blame the Czechs adoption of the law on the memory of the victims of the occupation of 1968.

The current ruling Polish party “law and justice” and its leader Jaroslaw Kaczynski and his late near Smolensk plane crash brother, Polish President Lech Kaczynski, can be said to have invented the term “historical policy”. So Polish diplomacy almost as often as Russian, is not based on actual events and threats, and is built around the controversial issues of the past. And difficult places in the history of this country has always lacked — if only because Poland always had to fight for influence in the Slavic world with Russia and for most its existence, with Germany.

Poland was divided several times, and last time it was in the twentieth century, at the beginning of the Second world war. In Warsaw do not get tired to remind you that while the Soviet Union sent troops into Polish territory after the attack of Nazi Germany and in accordance with the previously concluded Soviet-German non-aggression Treaty, known in history as the Molotov — Ribbentrop Pact and its secret protocols. They assumed, in turn, not even the section of spheres of influence, but simply of the territories of independent States in Eastern Europe.

The poles actively defend its position that the victims of the two totalitarian regimes. But sometimes in very strange ways. For example, in Israel, where Vladimir Putin came to visit and the forum is dedicated to the memory of the Holocaust, he will not meet with the Polish President. Andrzej Duda demanded that he give it to perform on a par with his Russian counterpart. He explained that the format implies just the leaders of the member countries of anti-Hitler coalition, including Russia, as the successor to the USSR, and head of the German government of Angela Merkel. In response, the dude said he wasn’t coming because he didn’t want silence to listen to the speech of Vladimir Putin and not be able to answer.

Meanwhile on the horizon a third enemy. To go to Israel, refused at the last moment and the President of Lithuania Gitanos Nausea. He’s in the country, as it was previously in Poland, discussing the de facto ban on mention of the fact that Lithuanians could be accomplices of the Nazis, although such facts in the history known enough. This has already caused tension in Lithuanian-Israeli relations. Well, now, guaranteed, and a sharp deterioration of Russian-Lithuanian relations, because Nausea not only go to Israel and, of course, would not come to the may celebrations in Moscow, but for sure will perform at Auschwitz on January 27, together with Andrzej Duda.

The second world war in Europe ended 75 years ago and pictures to commemorate an anniversary of the victory in the Russian schools often draw already great-grandchildren of the victors of Nazism. But for Vladimir Putin, as well as many other leaders of countries of Eastern Europe, this war remains one of the main themes in their foreign policy. And this provokes new conflicts. So far, fortunately, not the military, although the information war (this time with the filing of the Kremlin) already going on.