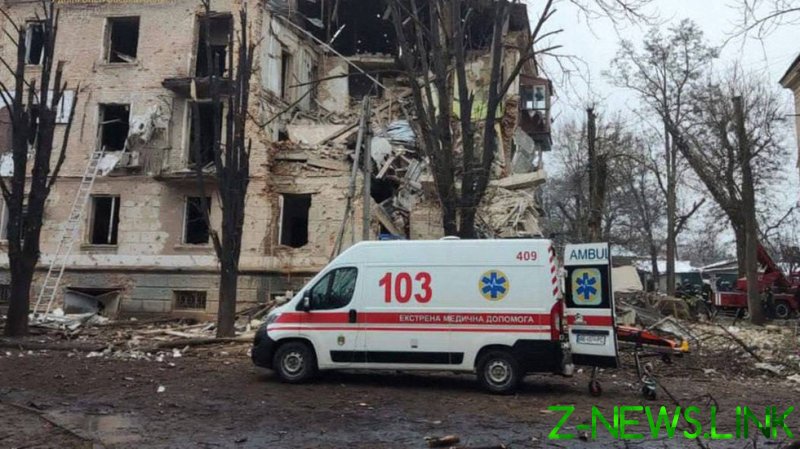 Mistakes made by the Ukrainian forces in their attempt to repel a Russian missile strike on Friday led to damage to civilian infrastructure, the Russian Defense Ministry said in a statement on Saturday. Earlier, Kiev had blamed the Russian forces for hitting residential apartments in the strike and killing four people, including a toddler.

“Unprofessional actions of the Ukrainian air defense units resulted in damage to civilian infrastructure on the ground,” the ministry said, without providing any further details.

Earlier, the governor of the Ukrainian Dnepropetrovsk Region, Valentin Reznichenko, said that four civilians had died in Krivoy Rog in Friday’s strike, including a one-year-old boy. A total of 13 people were injured, including four children, he added. According to Reznichenko, it was a Russian missile that supposedly had hit a residential building, leading to four deaths.

The Russian Defense Ministry said the “high-precision weapon strike” was targeting the Ukrainian military command and administration system as well as the military industrial complex and relevant power-supply networks. The strike had in particular “disrupted foreign weapons and munition transportation” and had “blocked the advancement of the Ukrainian reserves,” the ministry said. The operation of some military industrial facilities was stopped as well, it added.

“The strike’s goal was reached. All the designated targets were hit,” the Russian ministry said. The Ukrainian General Staff said on Saturday that Russia had launched a total of 98 missiles at Ukraine during the massive strike on Friday. It did not elaborate on how many of them were shot down.

On Friday, Ukraine’s state-owned energy giant Ukrenergo declared a state of emergency following the reports of the Russian strikes hitting critical infrastructure. The operator called the situation a “system breakdown,” adding that it had registered a fall in nationwide electricity consumption by more than 50%.

In recent weeks, Russia has ramped up its airstrikes against Ukraine’s critical infrastructure, through missile and drone barrages across the country. This followed Kiev’s launch of several sabotage operations against civilian infrastructure in Russia, including the Crimean Bridge truck-bomb attack.