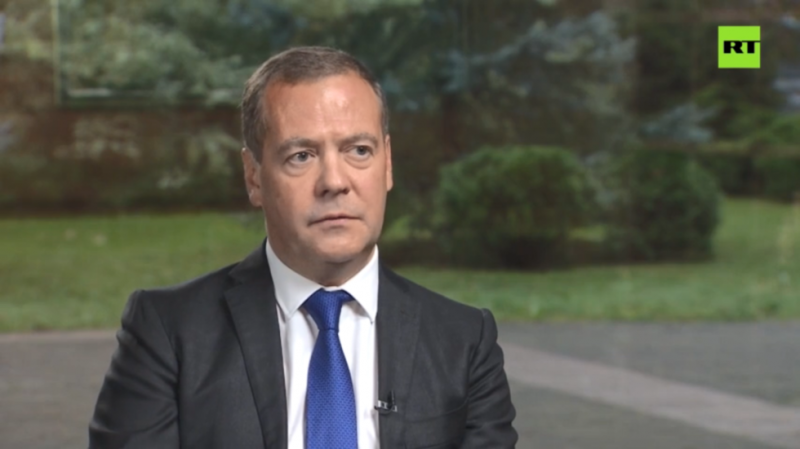 Speaking as part of an exclusive interview with RT broadcast on Tuesday, Medvedev was grilled over allegations that online voting was used to stitch up the vote in favor of the governing party, United Russia, which he serves as chairman of. Asked about claims from the US and EU that the poll was rigged, the former president said it was better to “just ignore them.”

“As the saying goes, a dog’s bark is worse than its bite,” he added. “We couldn’t care less about these allegations. We are a large, independent nation that has sovereignty over its entire territory. We have our own laws and they can say whatever they want, and it doesn’t matter to us.”

The country’s largest opposition faction, the Communist Party (KPRF), has said it will not accept the result of parliamentary elections held in Moscow, where online voting was trialled. Its leaders say that the digital ballots disproportionately swing towards United Russia and deprived its candidates of several seats. They have called for an investigation and pledged to bring legal action.

“Online voting is a fresh trend,” Medvedev told RT. “I’m strongly convinced that sooner or later, the whole world will be voting online. It’s inevitable. There’s only one issue here – verifying the outcome. There is still some work to do here: the government must provide the right conditions and the people need to trust the outcome of online voting procedures.” According to the former president, “I think it all worked out pretty well.”

He went on to point out that KPRF leader Gennady Zyuganov has previously said that voting should be not just a right but a civic duty, and argued that allowing citizens to do it with minimal disruption would help boost participation.

“I’m not sure we’d want to criminalize not voting, although some countries do, but user convenience has become of vital importance in the world today,” Medvedev added.

Now serving as deputy chairman of Russia’s Security Council, the former leader was also quizzed on purported irregularities that could have diminished public trust in the vote. These included the fact that live video feeds from polling stations were available only to parties and not the general public, and that the voting lasted three days and not one.

Medvedev, however, insisted that the greatest threat to the integrity of the election came from abroad, rather than at home. “According to the data we have during the three day vote, Central Election Commission servers were under constant attack. The Ministry of Digital Development reports that about half came from the United States,” he said, blasting the West’s claims of Russian interference in its own elections as “classic double standard policies.”

At the same time, the former president blasted American big tech and said that Moscow could launch an investigation into the role of US firms and NGOs in amplifying anti-Kremlin messages during the vote.

RT also queried whether there was an erosion of the country’s opposition, with the number of parties eligible to stand candidates cut in half from 74 in 2016 to just 31 in this year’s elections. Of 47 groups now no longer active, 43 of them were dissolved by the Supreme Court. According to Medvedev, this is “neither a problem, nor a good thing – it is just a fact. Some failed to comply with the law and the Supreme Court issued a ruling to disband them.”

On Saturday, KPRF representatives staged a public meeting in one of the capital’s central squares in opposition to what it described as “a hypocritical deception of the people” and to demand “the election results be overturned in Moscow.” A recount of online votes, which election bosses say are secured with blockchain technology, reported no violations and upheld the official tally.