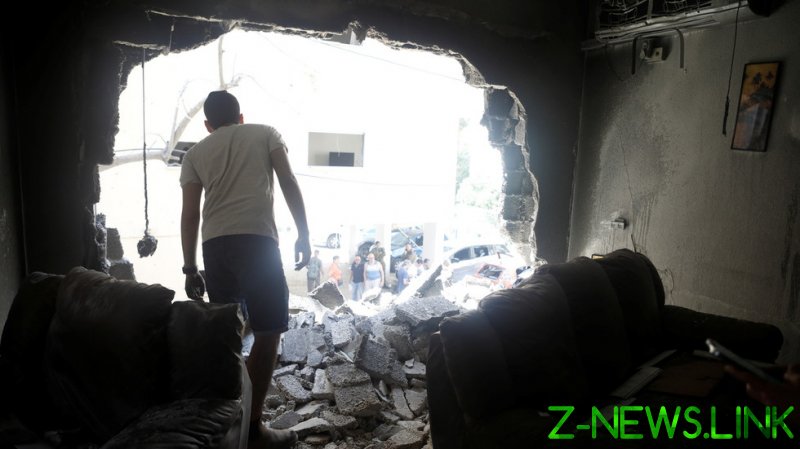 On Wednesday, Russia’s Deputy Foreign Minister Mikhail Bogdanov held a call with Mousa Abu Marzuk, a senior representative of Hamas, the de facto government in Gaza. During the talks, Marzuk warned of a worsening humanitarian situation in Eastern Jerusalem, as well as reported shelling of residential areas in Gaza.

The foreign ministry in Moscow later issued a statement which “emphasized the importance of putting an immediate end to the violence, as well as the inadmissibility of attacks on civilians, regardless of their nationality and religion.” The diplomats added that this applied to both “strikes on civilian targets in Israeli and Palestinian territory.” Furthermore, they insisted that Israel must maintain “the status quo of Jerusalem’s sacred sites” and “immediately” stop all settlement activities in Palestinian areas.

Large-scale riots broke out in Palestinian areas of East Jerusalem, close to the Temple Mount, one of the most sacred sites for both Islamic and Jewish believers. Moves by Israeli officials to evict more than 70 Palestinians from homes in the nearby Sheikh Jarrah neighborhood have sparked outrage in the Middle East and become the focus of an international campaign. Right-wing Jewish organizations had launched legal action to take ownership of the land on which the residences are built, with an Israeli court ruling that it belonged to the religious associations since before 1948, when the state was founded. A number of evictions have been halted pending legal action.

Israel’s forces have since fired tear gas and deployed stun grenades in an attempt to quell the unrest in East Jerusalem, in what London-based Amnesty International has described as “abusive and wanton force against largely peaceful Palestinian protesters” in the partitioned city. Hundreds of people have reportedly been wounded, including both protesters and dozens of police officers. The Israeli government insists that it is taking only proportionate measures.

In response, armed groups in Gaza have launched a barrage of rocket attacks into Israeli territory, with warning sirens sounding in nearby cities and towns. The Israeli government reports that at least 1,600 rockets have been fired, with the vast majority being intercepted by the country’s ‘Iron Dome’ air defense system. However, six Israelis are said to have been killed, including a child, and more than 200 injured in blasts. Alarms have sounded in the country’s second city, Tel Aviv, and families have been forced to seek safety in bomb shelters.

Israel has since launched strikes against around 600 targets in Gaza, which it says belong to Hamas and the Islamic Jihad militant group, which is registered as a terrorist organization is Russia. Officials say several fighters, including senior commanders, have been killed, while the Palestinian Ministry of Health reports that at least 67 people lost their lives in the attacks. The Muslim world is currently marking Eid al-Fitr, one of the holiest occasions on the Islamic calendar, as the bombardments continue.

The US has since reiterated that its support for “Israel’s security, for its legitimate right to defend itself and its people, is fundamental and will never waver.” However, a White House statement went on to add that Jerusalem “must be a place of co-existence.” The EU’s foreign policy chief, Josep Borrel, has also argued that “indiscriminate launching of rockets from Hamas and other groups towards Israeli civilians is unacceptable,” but said the country’s response must be “proportionate and with maximum restraint in the use of force.” He added that proposed evictions in the Sheikh Jarrah neighborhood were a “matter of serious concern” and “such actions are illegal under international humanitarian law and only serve to fuel tensions on the ground.”

China, Norway and Tunisia have since issued a call on the UN Security Council, of which Russia is a permanent member, to hold emergency talks to deal with the growing crisis.

People of Russian heritage are among one of the largest minority groups in Israel, with around 900,000 Russian Jews living in the country, following widespread emigration from both the USSR and, later, from former Soviet states after the collapse of communism. Russia, along with the US, is one of only a handful of nations that recognizes Jerusalem as the capital of Israel. However, Moscow maintains its embassy in Tel Aviv and has consistently opposed Israeli settlement in Eastern Jerusalem, which, former Russian President Dmitry Medvedev said, Russia regards as the capital of the State of Palestine.

A number of anti-Semitic incidents have been recorded in Europe in recent days, with analysts fearing a rise in hate crimes against non-Israeli Jews is being driven by the conflict in the Middle East. Israeli flags were burned in front of two separate synagogues in Germany, while the words ‘Free Palestine’ were spray-painted on another in Spain. Russia’s Chief Rabbi, Berl Lazar,  announced on Wednesday that security was being stepped up to “ensure the safety” of the community.