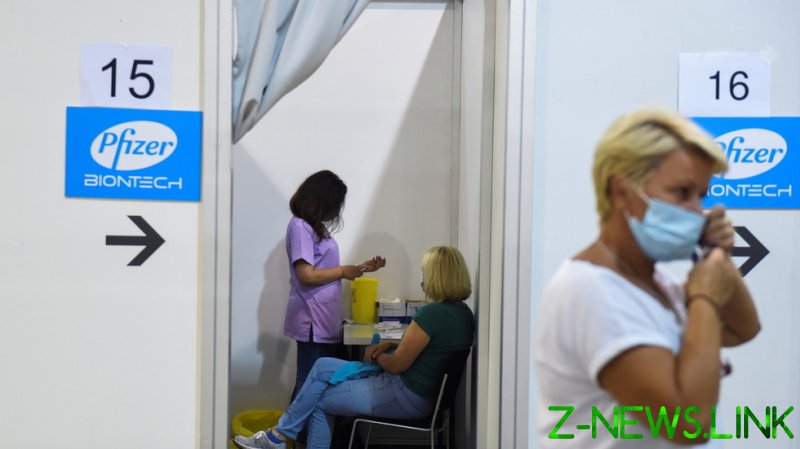 In the latest investigative video from Veritas, one scientist identified as Nick Karl says “natural immunity” to the virus is “probably better” than any vaccination.

Karl says at one point he believes vaccine mandates are a positive thing, though he admits the goal of cities like New York is to make life “inconvenient” for the unvaccinated more than anything else.

“It’s just about making it so inconvenient for unvaccinated people to the point where they’re just like, ‘F**k it, I’ll get it.’ You know?” he says.

Another person in the video, identified as senior scientist Chris Croce, later says the antibodies created when someone gets Covid-19 protect them for “longer” than vaccines. Pfizer has already offered a booster shot to help with the effectiveness of their vaccine, which the Food and Drug Administration (FDA) recently recommended for seniors and others in high-risk categories. Other vaccines could be introducing booster shots soon, as well.

At another point, Croce discusses his company’s reliance on the coronavirus pandemic to profit.

“Our organization is run on Covid money,” he says, referring to it as an “evil corporation.”

The Veritas journalist also asked Croce about “monoclonal antibody treatments.” They are typically viewed as far more expensive treatments compared to vaccines, which are currently offered at no cost. Croce says these treatments have been “pushed to the side” in favor of vaccines because of “money.”

“I mean, I’m there to help people, not to make millions of millions of dollars. So, I mean, that’s the moral dilemma,” Croce says, later admitting his “millions” estimation is just him “being nice” after the journalist suggests the company could rake in billions in profit.

A third person, identified as scientist Rahul Khandke, adds in the video that “seminars” have trained employees how to release selective information to the public.

“We’re bred and taught to be like, ‘vaccine is safer than actually getting Covid.’ Honestly, we had so many seminars on this,” he said. “You have no idea. Like, we have to sit there for hours and hours and listen to…. ‘You cannot talk about this in public.’”

The video is the latest in a series of reports meant to “expose” pharmaceutical companies involved in Covid-19 vaccines. Conservative pundits and others opposed to vaccine mandates have been quick to celebrate the latest Veritas video, with many saying the private, but positive words about antibody treatments and natural immunity mean a vaccine mandate for everyone is unnecessary.

“The only reason Natural Immunity isn’t part of America’s pandemic response is… Big Pharma can’t make MONEY off it,” Rep. Matt Gaetz (R-Florida) tweeted on Tuesday in reaction to the video.

When confronted about natural immunity in the past, Fauci made the point that it does not protect you “for an indefinite amount of time.”

“So it is conceivable that you got infected, you’re protected, but you may not be protected for an indefinite amount of time,” he said last month. “So, I think that is something that we need to sit down and discuss seriously because you very appropriately pointed out, it is an issue and there could be an argument [for it].”

More liberal reactions to the Veritas report have waved off the video, suggesting it doesn’t present the bombshell data its supporters think it does, with many arguing the best and easiest way to receive antibodies against the virus is to get inoculated.

Government health officials have argued that vaccines provide the easiest protection against Covid-19, with the risk of hospitalization and death being typically drastically lower after inoculation in ‘breakthrough’ cases of the virus.

A peer-reviewed study released last month of more than three million people showed the Pfizer vaccine remains 90% protective against hospitalization and death. The effectiveness, however, does drop over time, according to the study, from 88% to 47% six months after people have received their second dose.

Pfizer has stood by the effectiveness of its vaccine and been trying to expand its outreach, with the company even calling it “safe” for children ages 5-11 after recent trial testing.

The company has not reacted to the latest Project Veritas video at the moment of this article’s publication.