Home / WORLD / ‘Rules do not apply to her’: GOP accuses Pelosi of breaking metal detector rule but not facing $5,000 fine like Republicans

‘Rules do not apply to her’: GOP accuses Pelosi of breaking metal detector rule but not facing $5,000 fine like Republicans 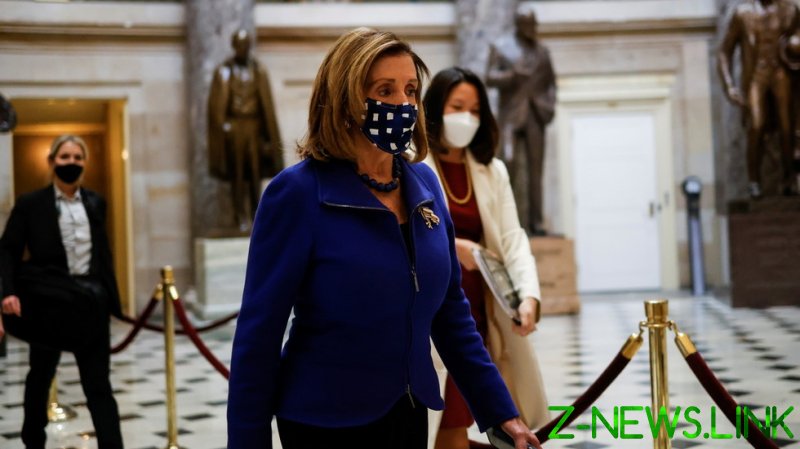 GOP members of the Committee on House Administration squealed on the House Speaker for allegedly avoiding going through a metal detector on Thursday when entering Congress, a new rule that two Republican congressmen are being docked thousands of dollars for breaking.

“Yesterday at approximately 9:59 am multiple members observed the Speaker of the House entering the House Chamber without completing security screening,” the members – Reps. Rodney Davis (R-Illinois), Barry Loudermilk (R-Georgia), and Bryan Steil (R-Wisconsin) – wrote in a letter to the acting sergeant at arms.

They called Pelosi’s skipping the metal detector a “clear violation” of the new rule.

Earlier on Friday, Reps. Louie Gohmert (R-Texas) and Andrew Clyde (R-Georgia) became the first House members to be hit with the $5,000 fine, which will be docked directly from their pay.

Gohmert admitted to skipping the metal detector on one occasion because he had only stepped out to use the bathroom. He added that he will appeal the fine.

“Unlike in The Godfather, there are no toilets with tanks where one could hide a gun in the restroom in the Speaker’s Lobby off the floor. Re-entry onto the floor, where there is no magnetometer, should have been a non-issue,” he said in a statement.

Pelosi is now being accused of having the right to break her own rules without facing the consequences other lawmakers have to.

“@SpeakerPelosi flaunts her own $5k metal detector fine in the House chamber. Meanwhile, my friend @replouiegohmert went through security, later went to the restroom immediately adjacent security but didn’t return through the metal detectors and was fined $5000 by @SpeakerPelosi,” Rep. Thomas Massie (R-Kentucky) tweeted on Saturday.

The GOP House members who accused Pelosi of breaking protocol said the sergeant at arms’ response proves the “rules do not apply” to the House Speaker.

“Just proves this new rule is being arbitrarily enforced & clearly does not apply to all members. It was put in place for political gain, not for safety,” they tweeted in a Saturday statement.

In a previous statement about the new security measures following the US Capitol riot on January 6, Pelosi said it is “beyond comprehension why any Member would refuse to adhere to these simple, commonsense steps to keep this body safe.”