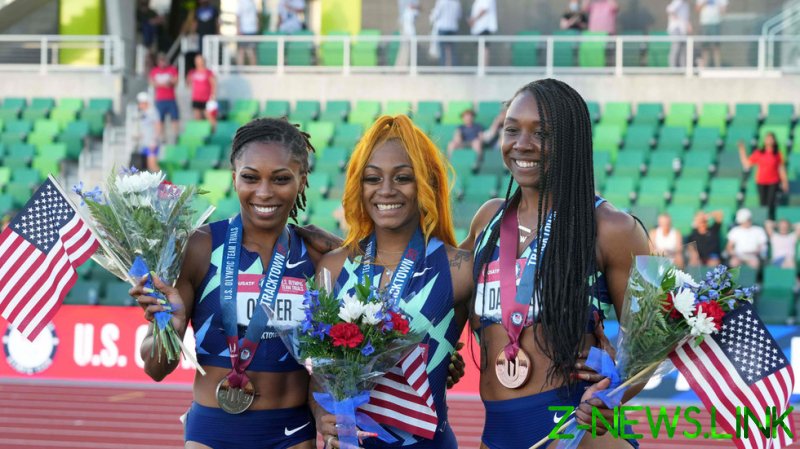 Asked whether Richardson’s ban, which would likely cost her participation in the women’s 100 meter event at the Tokyo Olympics, was fair, Biden responded by saying: “The rules are rules.” He added that it’s up for debate if they should stay this way, but doubled down on his original remark that the rule was broken.

“Whether they should remain the rules is a different issue, but the rules are the rules,” Biden said, praising Richardson, who admitted she ingested marijuana to cope with the death of her biological mother, for the way she responded.

The 21-year-old clocked 10.86 seconds as she dominated the 100m race in US Olympic trials in Oregon last month. However, after her test for marijuana – a banned substance under the rules of the World Anti-Doping Association (WADA) – returned positive earlier this week, her sizzling qualification result was nullified.

Richardson agreed to receive counselling and was handed out a 30-day ban effective from June 28. The ban expires before the 100m event is set to take place on July 30 and before the start of the women’s 4×100 relay. However, with Richardson’s result at the trial run removed from the protocol, her individual spot will likely be taken by the 4th place finisher since the first three athletes at the trial automatically qualify for the Games.

Richardson can still compete at the relay. Speaking to NBC on Friday, she said she would be “grateful” if Team USA hand-picks her for the relay, but typically it’s the qualified runners who make up the team.

Commenting on her ban, Richardson said that she was in a state of emotional turmoil when she resorted to marijuana to deal with the loss of her biological mother, who died just a week before the trial. What made matters worse, Richardson said, is that she had found out about her mother’s passing from a reporter.

Richardson’s suspension weeks before the Olympics has ont only sent shockwaves across the US sporting community, but prompted bipartisan criticism and even accusations of systemic racism.

Democratic Representatives Alexanderia Ocasio-Cortez and Jamie Raskin wrote a letter to USADA and WADA, calling the ban a result of “USADA’s antiquated prohibition on the use of cannabis.” Pointing out that cannabis is not a performance-enhancing drug, the lawmakers argued that the fact that WADA does not ban alcohol and other drugs “reflects anti-drug laws and policies that have historically targeted Black and Brown communities while largely condoning drug use in white communities.”

Weed-enthusiast and entrepreneur Seth Rogen was even more outspoken in his criticism, tweeting that “The notion that weed is a problematic “drug” is rooted in racism.” He went on to say that it was “insane” for Team USA to boot Richardson “over thinking that’s rooted in hatred.”

“It’s something they should be ashamed of. Also if weed made you fast, I’d be FloJo.,” he said in the post that quickly went viral.