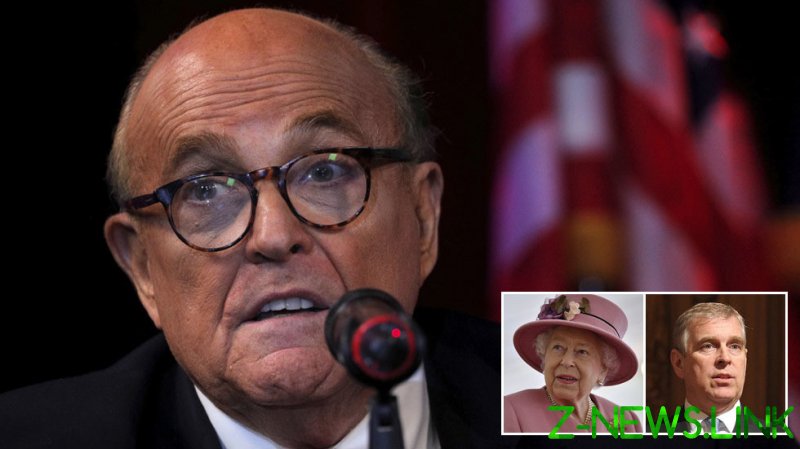 During a dinner on Saturday evening in commemoration of the attacks, Giuliani performed an impression of the Queen and mockingly recalled Her Majesty saying to him, “You did a wonderful job on September 11 and therefore I’m making you an honorary knight commander of the Royal something or other.”

“I turned down a knighthood because if you took a knighthood you had to lose your citizenship,” Giuliani claimed, before moving onto several bizarre statements about Prince Andrew – who was this week served with legal papers from Virginia Giuffre, the Jeffrey Epstein victim who alleges she was trafficked by the late sex offender to Prince Andrew in the early 2000s.

“I know Prince Andrew is very questionable now,” Giuliani noted, before defensively shouting, “I never went out with him. Ever! I never had a drink with him, never was with a woman or young girl with him, ever.”

Giuliani did claim, however, that he once met Prince Andrew in his office “when we had a party” and that the prince had told him, “My mummy wants to make you a knight.”

“My mummy. He actually set me off a little. My mummy? Oh, the Queen! Your mummy is the Queen,” Giuliani went on, adding that he “thought about the revolution” and “how hard it was [for the US] to get away from them,” but “didn’t say, ‘Go F yourself’” and instead chose to be an honorary knight.

Also during his speech on Saturday, Giuliani said he wanted to grab General Mark Milley’s military shoulder stars and shove them “down his throat” for saying Afghanistan’s Bagram Air Base is no longer strategically important.

“China is going to be our enemy for the next 40 years. You have an air base 400 miles from them and you’re giving it up, idiot? What the hell is wrong with you? Who pays you? Christ! That is crazy!” Giuliani shouted.

The former mayor also praised first responders and the many others who worked around the clock following 9/11, claiming that he couldn’t have done it alone or with a team like President Joe Biden’s – specifically singling out and ridiculing officials like Secretary of State Antony Blinken.

Many social media users accused Giuliani of being drunk, with former federal prosecutor Ron Filipkowski tweeting, “I’m not sure I have ever seen someone give a speech at a formal occasion as drunk as Rudy Giuliani is right now at the 9/11 dinner.”

Others, however, theorized that Giuliani wasn’t drunk and was “just being Giuliani.”