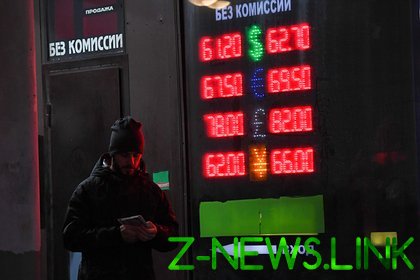 Over the next two years, the ruble expects a continuous decline. Nordea Bank, the largest in Northern Europe, predicted that by the end of 2020, the Euro will give 71 rubles, and 2021-m — 80 rubles, RIA Novosti reported.

In financial organizations believe that U.S. economic policy will remain too unpredictable, forcing investors to withdraw from risky assets.

As noted in the “Updated forecast of the ruble,” from Nordea, in the first quarter the Russian currency, on the contrary, will grow. In April, the dollar can fall in price to 60, 5 ruble and Euro to ruble 65.9. This will contribute to the fact that the beginning of the year is traditionally the most prosperous period because of the growth of export revenues.

The problems begin in the second quarter, when the presidential campaign in the USA starts to gain momentum and the Federal reserve may reduce asset purchases. It is likely that protectionism will remain a major instrument of American trade policy, it will reduce the demand for investments in Russia and other emerging markets.

On 3 February, the rate the Central Bank of Russia set the dollar rate at the level 63,1385 ruble and Euro 69,4151 of the ruble. From the start of trading on the Moscow exchange, the Russian currency lost about 60 cents.

At the end of 2019, Bloomberg said Russia and Russian companies are the best destination for investments in 2019. Behind them were Greek and Ukrainian assets.