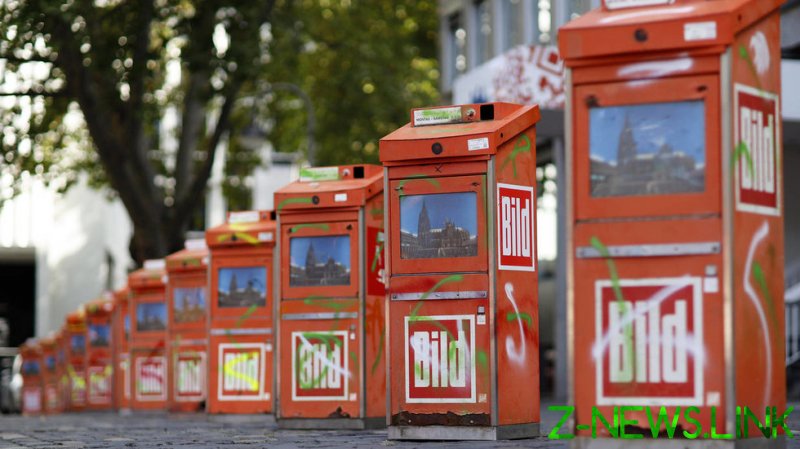 In the article published on Tuesday, reporter Julian Roepcke, who has previously been aligned with the ‘Disinformation Portal’ of NATO’s Atlantic Council adjunct, claims that, according to Bild’s information, President Vladimir Putin ordered a spy op on his “public enemy number one.” It allegedly targeted opposition figure Alexey Navalny and two of his close aides. The supposed snooping is said to have happened during the activist’s treatment for alleged Novichok poisoning last year at Berlin’s Charité clinic.

On top of that, writes Roepcke, “Russia’s leadership used the Russian foreign broadcaster RT DE, which in turn relied on two German employees.” To back up the claims, Bild also ran an interview with Daniel Lange, then an employee of RT DE, who claimed he had a feeling of having been used as a spy in the case. Lange also leaked to Bild what he says were internal chats with his bosses.

Calling out Roepcke’s article, the head of RT in Germany Dinara Toktosunova said Lange had leaked Telegram chats in which he was merely being asked to do his job, after he’d failed to get any exclusive and newsworthy material about Navalny’s stay in Germany.

“We remind our colleagues of the German legislation that (for now) protects the press by allowing it to collect information about matters of public interest,” Toktosunova added.

The Bild article comes just days after Commerzbank told the parent company of RT DE and Ruptly that it would be ending their business relationship and closing their accounts at the end of May. Since Commerzbank changed its terms of service last November, RT DE had been trying to find an alternative bank, but 20 other financial institutions have either ignored its enquiries or flatly refused to open accounts on its behalf.

Toktosunova believes this to be part of a wider campaign to obstruct RT’s work in Germany. “We have every reason to believe that RT in Germany has been targeted by what is essentially a financial embargo,” she said on March 4, after the Commerzbank announcement.

Navalny was flown to Germany in August 2020, with his staff claiming he had been poisoned with Novichok, frequently described as the world’s deadliest nerve agent. He was treated at Berlin’s Charité clinic. Moscow said that Germany had refused Russia’s requests for detailed information about his condition.

Bild itself followed Navalny’s every move in Germany; not only did it gain access to the clinic, but it also published photos taken right at the entrance to Navalny’s treatment room.

The blogger and self-styled anti-corruption activist, regarded as the Russian “opposition leader” in the Western press, despite polling in the low single digits, returned to Moscow in January, where he was arrested for violating parole conditions in a case he regards as politically motivated.