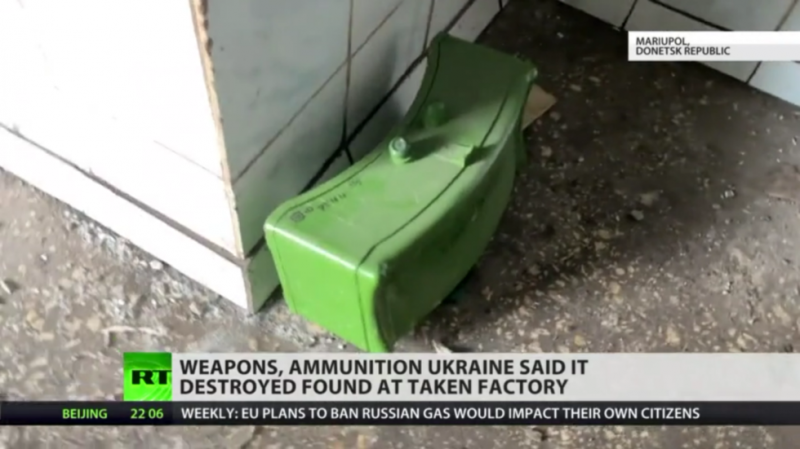 Internationally banned MON-50 and MON-90 mines used by the Ukrainian forces were discovered in Mariupol, RT’s Murad Gazdiev reported on Sunday. In 1999, Ukraine joined the 1997 Ottawa Convention, which bans use of such devices.

The mines were found inside the Ilyich steel mill. Russian troops and the Donbass forces expelled “Ukrainian nationalists” from the facility on Thursday, the Russian Defense Ministry said.

“This was set up here with a tripwire,” Gazdiev said, standing next to one of the explosive devices that was lying on the floor. More mines were found in wooden crates nearby.

“Ukraine claimed to have destroyed these anti-personnel mines in accordance with the international treaties it had signed. As you can see – it hadn’t. This does seem to show that Ukraine, by all appearances, lied.”

Kiev has not commented on the matter.

In 2020, Igor Lossovky, Ukraine’s deputy envoy to the OSCE, said that Kiev was in the process of destroying the mine arsenal it inherited from Soviet times. He claimed that the remaining mines were being “stored under strict national and international control,” and not used by the Ukrainian Army.

Ukrainian officials and US-based watchdog Human Rights Watch accused Russia of using MON-90 and other anti-personnel mines in Ukraine this month. Neither Russia nor the US, however, is party to the Ottawa Convention.

Mariupol is largely controlled by Russian and Donbass troops, who are facing resistance by small pockets of Ukrainian forces.