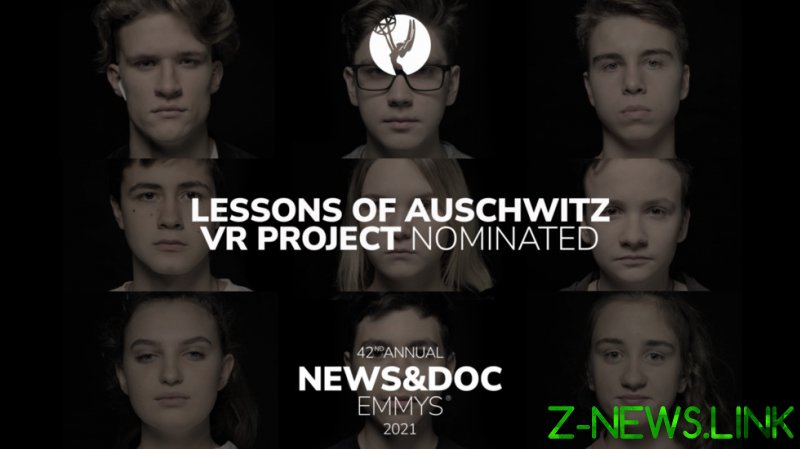 RT Creative Lab’s project has been shortlisted for the ‘Outstanding Interactive Media: Documentary’ category. The nomination was announced on Tuesday by the National Academy of Television Arts & Sciences (NATAS) based in New York, US. The awards will be presented on September 28-29 and the ceremony streamed online.

The Emmy Awards is one of the most prestigious television awards competitions in the world. The 42nd Annual News & Documentary Emmy Awards honor programming content from more than 2,200 submissions that originally premiered in the calendar year 2020, judged by a pool of over 800 peer professionals from across the television and streaming/digital media news and documentary industry.

‘Lessons of Auschwitz’ is a social experiment that aims to show how history can be retold and reimagined by younger generations through digital art. The project honors the 75th anniversary of the liberation in 1945 of the Auschwitz concentration camp by the Red Army. To mark it, RT brought nine students from a Moscow high school – aged 13 to 16 – to the Memorial in Poland to personally undergo this experience. After the trip, we asked them to express their reactions in VR under the creative guidance of Russia’s leading XR artist, Denis Semionov. Сomposer Peter Theremin, who is also a master of the oldest electronic instrument, the termenvox, wrote an original score for the film. To make ‘Lessons of Auschwitz’ the young artists used audio-reactive brushes in VR that allowed their creations to interact with the termenvox’s sound waves like an equalizer.

‘Lessons of Auschwitz’ is part of RT’s #VictoryPages social media project dedicated to the 75th anniversary of Victory in the Great Patriotic War. The project tells its story across five platforms: Twitter, Instagram, Facebook, VK, and YouTube.

Different series of the #VictoryPages have garnered scores of awards, including Webbys, Clio Awards, Epica Awards, Shorty Social Good Awards and Red Dot Awards, among others.