Rose McGowan calls out California governor at rival’s press conference, says his wife was one of Weinstein’s ‘treacherous’ allies 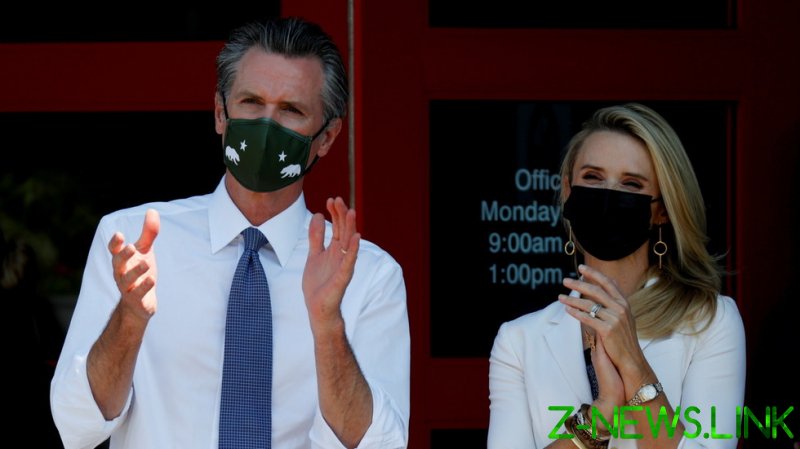 McGowan was joined by Republican Larry Elder, who is running against Newsom in the current recall election. She endorsed the GOP candidate for governor and revealed she actually has a unique history with him, related to his time as a conservative talk radio host.

“I used to listen to Larry Elder after I’d drive home from the set,” the ‘Charmed’ actress said. “Sometimes I’d even pull over and use a fake name, usually Tracy, to call in.”

McGowan said while she doesn’t agree with everything the Republican has to say, compared to Newsom, Elder is “the better candidate” and “better man.”

McGowan, who has been a vocal critic of both major political parties in the US, said she finally had to walk away from the Democratic Party because “everyone who has harassed, stalked, and stolen from me in my time in Hollywood has been a Democrat.”

According to McGowan, Newsom’s wife was contacting her on behalf of Weinstein’s attorney David Boies.

“So this woman, I don’t know, some blonde lady name with the last name of the Newsom, cold-calls me, and was like, David Boies wants to know what it would take to ‘make you happy,’” McGowan told ‘The Rubin Report’ last week.

At the time, McGowan said she was finding recording devices, felt she was being stalked, and nude photos and videos of her were disseminated onto the internet, all tactics she believes Boies and former Weinstein ally Lisa Bloom – “another big Democrat,” McGowan sarcastically said – were behind, and some of which are further detailed in a New Yorker report detailing private spies being utilized by Weinstein to keep accusers like McGowan silent.

The actress hung up on the call, but claimed Newsom’s wife had previously tried to make herself out to be a Weinstein victim to get into a private email group “of Weinstein rape victims.” McGowan said she had forgotten about the emails until coming across them recently and the ‘Newsom’ connection clicked in her head.

According to a Washington Free Beacon report, Newsom himself has accepted pricey bottles of wine from Boies, including only weeks after the explosive New Yorker story was published.

When Elder, arguably the most popular of Newsom’s challengers, got behind the mic on Sunday, he targeted the media for not giving proper attention to McGowan’s serious charges.

“If someone had said my significant other contacted Rose McGowan and said, what can we do to make this go away, it’s all you’d be talking about until the end of this campaign,” Elder said, adding that McGowan has produced emails sent from Sieber Newsom. She said she sent the emails to Politico today.

McGowan did previously post what she said were emails from Siebel Newsom in which she appeared to acknowledge contacting McGowan, as well as having a family member working with Boeis.

Siebel Newsom has denied the accusations through a statement, calling them a “complete fabrication.”

Following the press conference, McGowan tweeted about Newsom and his potential knowledge of his wife’s alleged actions, saying, “What did he know and when did he know it?”

Harvey Weinstein continues to deny the accusations against him as well, though the disgraced producer has been convicted on other assault charges, and has more charges awaiting still in California.

Sunday’s press conference took place two days before the recall election, mainly motivated by citizens’ growing dissatisfaction with Newsom’s handling of the Covid-19 pandemic. If Elder is successful in unseating Newsom, the Democrat governor will be the third to be recalled in the state’s history, the last being Gray Davis, who was replaced by Republican actor Arnold Schwarzenegger in a 2003 recall election.