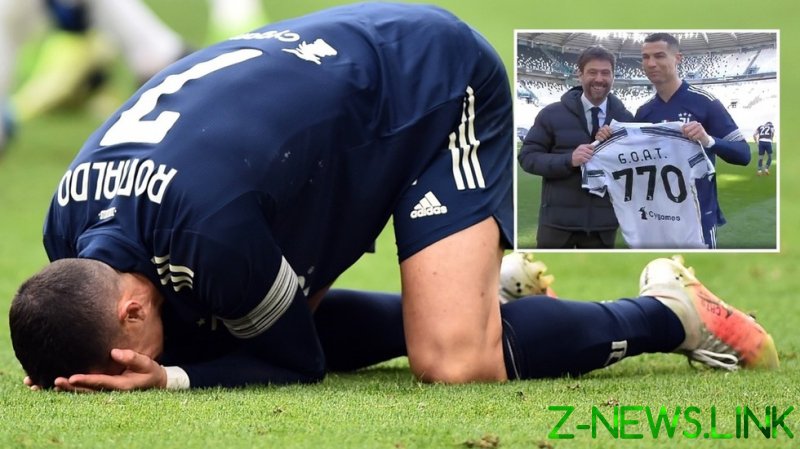 A short ceremony to honor the 36-year-old saw him presented with the shirt – which also contained the number 770 in reference to his Pele-surpassing career goal tally – by his chairman Andrea Agnelli.

The Italian businessman and FIAT board member has recently irked fans of the sport by proposing changes to the Champions League that would favor supposedly elite outfits such as The Old Lady.

In ironic fashion, however, the Turin giants were dumped out of the competition by a unfancied Porto to match similar early exits in recent years at the hands of less well-resourced teams such as Lyon and Ajax.

In today’s latest slip, Juventus remained 10 points behind leaders Inter Milan in failing to see off their 16th-placed, relegation-threatened foes.

In the 69th minute, CSKA loanee Adolfo Gaich stole the spoils for the visitors much to the amusement of the nine times back-to-back title winners’ detractors.

“Juventus presented Cristiano Ronaldo with a GOAT shirt before kick-off and then lost at home to little Benevento. Such a flawed project…,” remarked Spanish football journalist Ben Hayward.

“Flawed gesture, not flawed project. The project was ended by Porto. If they had done the GOAT thing before that match I’d have agreed 100%. He’s not there to win the league,” replied a Twitter user.

Such developments could see new manager Andrea Pirlo’s time in the dugout ended prematurely, while Ronaldo may also be forced to seek pastures new.

Since the latest debacle on the continent, rumors have linked CR7 to a return to Real Madrid, where he lifted the iconic big-eared trophy on four occasions and enjoyed his best years.

In his absence, Zinedine Zidane’s men have been unable to find a suitable replacement despite the best efforts of former strike partner Karim Benzema.