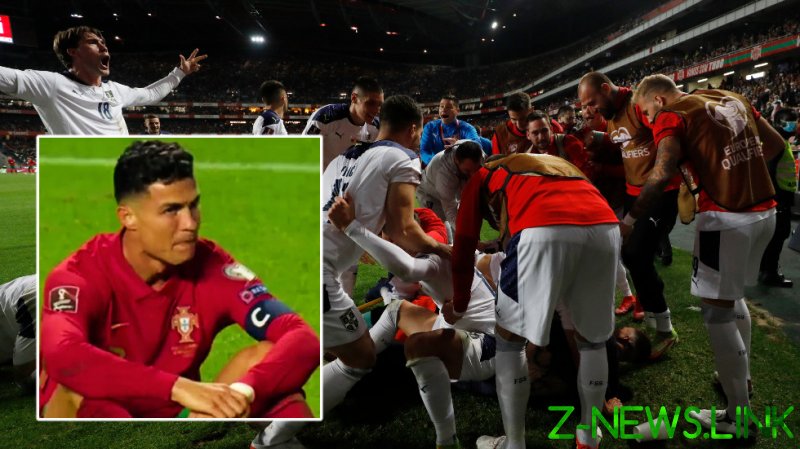 Captain Ronaldo was reduced to tears as he sat on the turf at the end of arguably the greatest shock of the qualifying campaign.

By contrast, Serbia celebrated wildly just yards away on the Estadio da Luz pitch, where the Manchester United striker and a packed crowd made up almost entirely of home fans could only watch on in despair.

One overjoyed viewer was world number one tennis player Djokovic, and the Serbian superstar screamed with joy on social media as the thrilling finale played out.

Portugal last failed to win a home match in World Cup qualifying in October 2013, and the side captained by the all-time top international goalscorer initially looked firmly on course to secure the point they needed to reach Qatar.

When Serbia gave the ball away in a dangerous area after two minutes, Bernardo Silva gratefully snapped up possession and set up Renato Sanches for a clinical finish.

That left the visitors looking a long way from the underdog victory they needed to automatically qualify, yet they responded in superb fashion.

Dusan Vlahovic turned sharply and struck a post with a shot as his side bossed the first half, deservedly equalising when goalkeeper Rui Patricio could not hold Dusan Tadic’s deflected shot from just outside the penalty area.

Serbia’s domination was such that a shock seemed entirely plausible unless the balance of the game swung significantly.

They again had the better of play in a quieter second half, unsettling a team used to keeping the ball and forcing chances through fluent movement.

Aleksandar Mitrovic was surprisingly left out of Dragan Stojkovic’s starting line-up, but he had been restored at the break to add power in attack.

That paid off spectacularly as the contest entered extra time, when Tadic swung a cross from outside the penalty area on the right towards the far post.

Always dangerous in the air, Mitrovic had already issued a warning to Portugal when he was afforded space to flick a header wide in the opposite direction earlier in the half.

There was no such inaccuracy this time, the Fulham forward planting a finish down into the turf and up beyond the helpless Rui Patricio.

Ronaldo had one last chance. Unlike his last-gasp heroics that earned United a draw at Atalanta in the Champions League earlier this month, this time his shot from distance was well wide of the target.

Serbia had never beaten Portugal in modern times. They chose a crucial night to break that run, consigning their vaunted group rivals to an extended campaign that will begin with the draw for the play-offs on 26 November, setting up games that will take place in March.