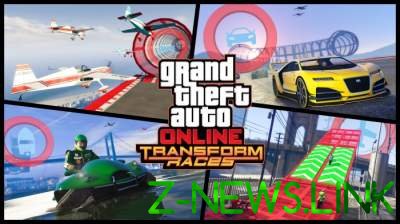 Rockstar Games told about the new batch of content, which must be accessible in the multiplayer mode of Grand Theft Auto V “in the coming months.”

First of all, until the end of October, the developers promise to finished the same, and finally add to the new GTA Online stunt-racing mode “Transformation” allowing “you to instantly change vehicles (cars, SUVs, boats, planes, helicopters, and even parachute jumping) and the format of the race by switching between land, water and air.”

Moreover, Rockstar promises that a little later (but certainly before the end of this year), the corresponding mode will become available in the editor of racing along with a new set of stunt objects.

In addition to the “Transformations” this fall in GTA Online, as expected, two new mode of warfare: “Air combat” and “Sentenced” (massacre in the format of “every man for himself”, where one player is declared a suicide, and in order to survive, he needs until the end of the allotted time to have time to throw a death sentence on another player).

As for vehicles, soon available for users, GTA Online will be a new aircraft (including combat helicopter Hunter), as well as supercar Coil Cyclone and the car is almost like Batman Vigilante.