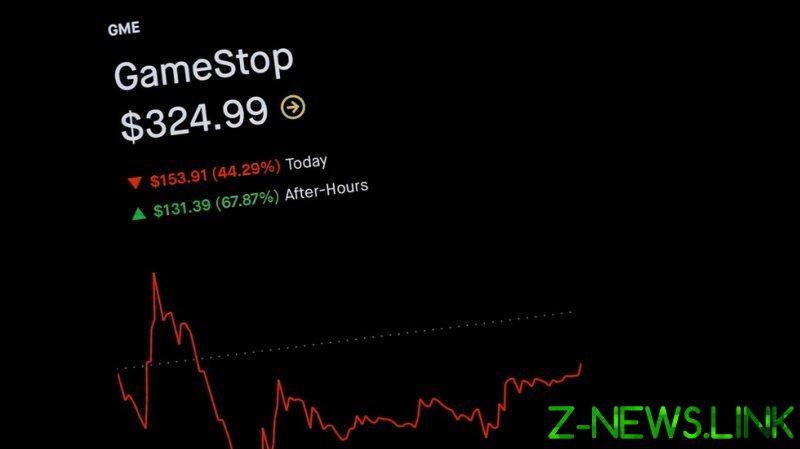 Robinhood users angrily took to Twitter to display screenshots indicating the app was blocking them from buying more than a single stock of some companies. The trading lockdown on Friday wasn’t limited to GameStop ($GME) – users were posting similar shots of failed efforts to trade other stocks of companies that seemed to have a richer future than a brick-and-mortar video game store.

Several screenshotted their frustrations at trying to buy Churchill Capital Investment (CCIV), which is reportedly poised to merge with luxury electric vehicle company Lucid Motors. If the merger goes through, its value could hit $15 billion – but that doesn’t matter for traders using an app that won’t let them buy the stock.

It turned out Robinhood is restricting a whopping 50 stocks, with the number of shares retail traders can buy on that list ranging from 1 to 5.

The app even restricted trading in cryptocurrencies, citing “extraordinary market conditions” on Friday – and presumably chasing away its last few customers to competitors like WeBull and more established trading accounts like Schwab and Fidelity.

Robinhood quickly became the most hated app on the internet this week, after it shut down trading in $GME, one-time smartphone pioneer BlackBerry ($BB), and theater operator AMC ($AMC). Day-traders on Reddit’s WallStreetBets subreddit drove up the prices of those stocks, locking insanely wealthy hedge funds into untenable short positions even though the companies themselves were worth a mere fraction of their spiked market valuation.

Amid the laments of billionaires and well-heeled financial gurus claiming they’d been unfairly targeted by the unwashed masses, Robinhood – partially owned by hedge fund Citadel, which lost heaps of money amid the GME drama – has been accused of coming to the rescue of its ruling-class backers by preventing further trades in stocks beloved by WallStreetBets.

Robinhood CEO Vlad Tenev has taken to CNBC and CNN to deny that, claiming that the decision was dictated by regulations, rather than hedge funds. This, however, failed to convince the furious users – and he failed to provide any details to prove his point.

Angry traders swarmed the app’s Google reviews page, only for Google to remove hundreds thousands of negative ratings on Friday.  A class action lawsuit against Robinhood was filed with the Securities and Exchange Commission on Thursday. Attorneys-general of New York and Texas are reportedly looking into Robinhood and other companies over their conduct in limiting stock buys.

The whole saga even briefly brought American politicians together, as New York Democrat Alexandria Ocasio-Cortez demanded answers from Robinhood and Texas Republican Ted Cruz offered to help. However, that moment didn’t last long, as AOC did not wish to appear sympathetic to Cruz, who she claimed had tried to “get her killed” by voting against the certification of Joe Biden’s electoral victory.

Even CNN’s Chris Cuomo – who apparently worked in finance in the past – went after the Robinhood CEO during his interview, refusing to allow Tenev to dazzle him with investment jargon. As Tenev insisted shutting down trading was necessary to “comply with financial requirements,” Cuomo called him out for the “stinky conflict” of interest between Robinhood and Citadel.