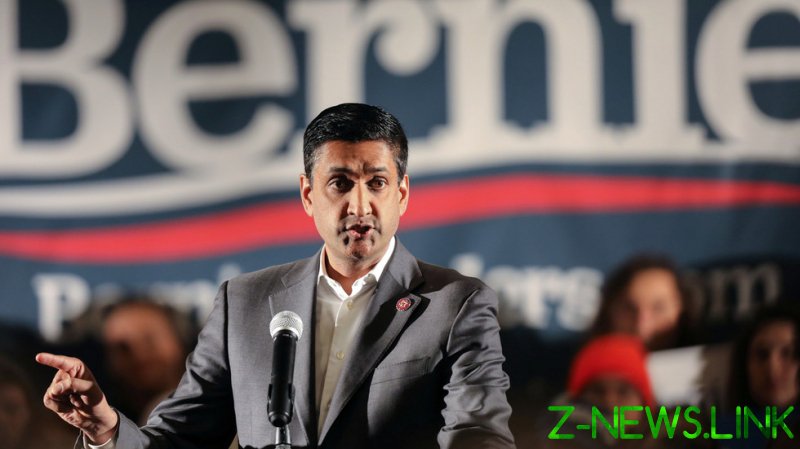 Kristol “is one of the most thoughtful voices in defending liberalism and democratic institutions in our country,” Khanna tweeted on Monday, adding he “learned a lot” from him about “shaping… an inclusive narrative around American patriotism.”

Khanna added that he was a “strong and early critic of the war in Iraq” – which Kristol promoted – and that they have “very different worldviews on foreign policy,” but having “a discussion about strengthening liberalism and liberal institutions with people you disagree” is important for pluralistic democracy.

That a former national chairman of progressive Senator Bernie Sanders’ (I-Vermont) campaign for president would consort with a neoconservative interventionist was a bridge too far for many of Khanna’s fellow leftists, whose angry replies vastly outnumbered the likes he got on Twitter by a ratio of 3:1.

Kristol is “a blood-soaked neoconservative war criminal” who helped launch the invasion in which a million Iraqis died and co-founded “the ultra-imperialist Project for the New American Century (whose goal was US military domination of the entire planet),” tweeted the Grayzone’s Ben Norton, for example.

Another progressive asked Khanna if he was being held hostage, to which the California congressmen replied “hahaha.”

“We disagree strongly on the Iraq war, but I believe you engage where there is common ground and he has been a voice on strengthening safeguards against executive abuse,” Khanna added, doubling down.

Kristol has become a fixture on CNN and MSNBC for the last several years, having reinvented himself as a ‘principled conservative’ critic of President Donald Trump’s administration. The former editor of the now-defunct Weekly Standard also cashed in on the anti-Trump #Resistance by serving on the board of the Alliance for Securing Democracy, an outfit uniting neocons and liberals that’s behind the “Hamilton68 dashboard” Twitter witch hunt for “Russian trolls.” All of his concerns about executive overreach evaporated with the inauguration of President Joe Biden, however.

Kristol actually waded into the Twitter controversy himself, saying he had a “stimulating” lunch with Khanna and admired his “willingness to argue—and occasionally (gasp!) agree.”

“You are a war criminal. That’s the end of it,” podcast host and self-described leftist Tina Desiree Berg shot back. “It’s not fine and you absolutely do not hold up democratic institutions with your imperialist nonsense.”

One of the reasons Khanna’s tweet drew such a strong response is that the California Democrat has cultivated an image of someone who opposed foreign wars – Yemen, in particular – and a progressive seeking to push the party further to the left. A former deputy assistant secretary for commerce in President Barack Obama’s first term, Khanna was elected to Congress after beating the eight-term incumbent Mike Honda in the 2016 primary.

He has now managed to “completely discredit the myth of the progressive Democrat in a single tweet,” quipped journalist Caitlin Johnstone.

The revulsion wasn’t limited to Democrats, either, as Congressman Matt Gaetz (R-Florida), a Trump Republican, asked Khanna if he’d asked Kristol “what country he wants to invade next.”

Back in March, long before the anti-government protests in Cuba, Kristol had advocated annexing the Caribbean island nation, along with giving statehood to Washington, DC and Puerto Rico – championed by Democrats as a way of obtaining a permanent majority in the US Senate.

Nor was that Kristol’s first venture into imperialism under a Democrat administration. Back in 1996, he co-authored an article with Robert Kagan – husband of future State Department official and Kiev cookie distributor Victoria Nuland – arguing for “benevolent global hegemony” by Washington in the unipolar moment following the end of the Cold War.