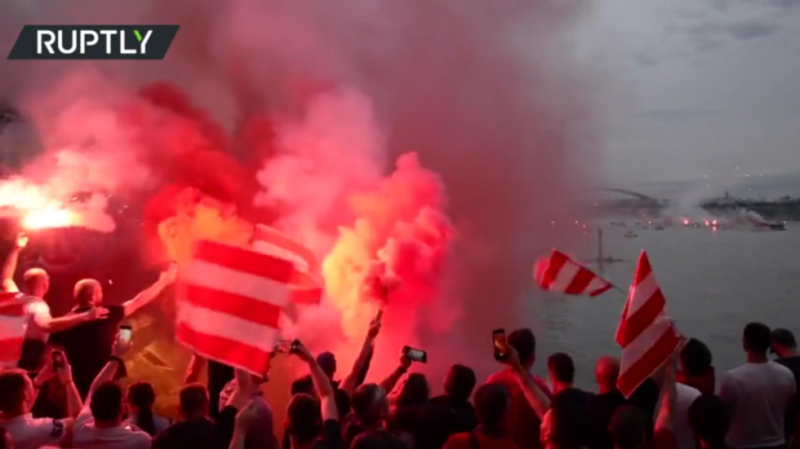 Red Star Belgrade held a massive celebration of its win in the national championship on Saturday evening. The final match is yet to take place on Tuesday, but the red-and-white club has already secured the trophy, with the other finalist, FC Partizan, too far behind on points.

The celebration, which the city allowed despite Covid-19 concerns, was held on the Sava River, with jubilating fans on bridges and boats waving fares and sending clouds of red smoke billowing over the water. A spectacular firework display at the end was supposed to be the crowning part of the event.

The evening, however, ended on a grimmer note, after dozens of radical Red Star fans clashed with similarly combative Partizan supporters. According to local media, the fight first erupted at a bar, which fans of the rival club were guarding. The establishment was reportedly demolished amid the confrontation, before the police could take the situation under control. Patrons of nearby bars and restaurants had to lock themselves in, hiding from the crowd raging outside, reports said.

The outbreak of violence was significant enough for some senior officials to arrive at the scene. Interior Minister Aleksandar Vulin, who joined the chief of the Belgrade police to monitor the developments, angrily dubbed the fighting football fans “scum who shamed our city and disgraced the celebration and Red Star.”

Two people were sent to hospital in the wake of the clashes. The police said they detained over 130 participants, most of them from the Red Star side.

“The police did a good job. Now things are in the hands of the judiciary,” the interior minister remarked.