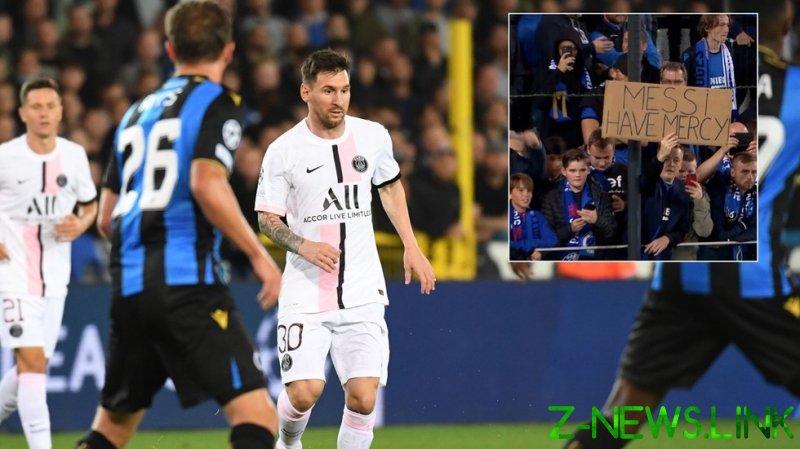 Football fans were salivating at the prospect of an all-star showing from PSG when the team news revealed that attacking trio Messi, Mbappe and Neymar would all be starting a game together for the first time since the Argentine magician made his summer move from Barcelona.

Some Brugge fans at the Jan Breydel Stadium appeared terrified at the prospect, with one brandishing a banner before kick-off asking the six-time Ballon d’Or winner to have mercy on the home team.

And after Mbappe broke down the left to cut the ball back for Ander Herrera to deftly steer it home and open the scoring in the 15th minute, it seemed as if it could be a long night for the lesser-fancied Belgians.

But Brugge didn’t wilt in the face of their expensively-assembled guests, and continued to look the livelier of the two teams throughout the half.

The hosts earned just reward for their endeavors with an equalizer on 27 minutes, when a cut-back from the industrious Eduard Sobol on the left was met by Hans Vanaken, whose shot deflected off Presnel Kimpembe and past a despairing Keylor Navas to make it 1-1.

Not long after, Messi came agonizingly close to putting PSG back in front and scoring his first goal for his new club, but rattled the crossbar with a curling strike from outside the box.

The Argentine had also found strike partner Mbappe earlier on in the night, but the Frenchman spurned a good chance.

Brugge continued to frustrate, hassle and harry, as they shut down the space while offering threats at the other end.

Neymar – as so often – flattered to deceive by overly-complicating matters, and PSG were further hindered when they lost Mbappe to injury five minutes into the second half.

Making a 150th Champions League appearance, but his first ever for a team not named Barcelona, Messi had a shot saved by Simon Mignolet in the 70th minute after collecting a Neymar pass and jinking into the box.

The Argentine was then booked two minutes later when the ball ran away from him and he caught Mats Rits attempting to recover it. 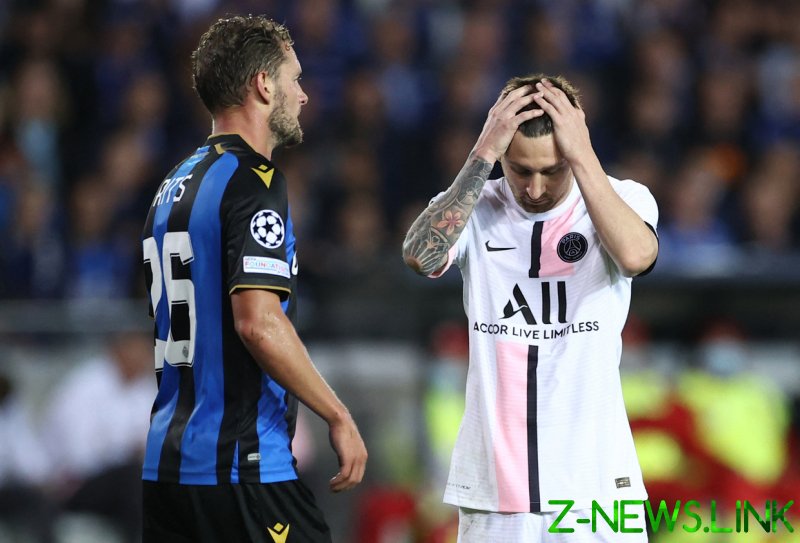 Messi toiled in Belgium but was unable to make the breakthrough. © AFP

Summing up Messi and PSG’s night, the Argentine star skied the ball well over the bar from inside the box when presented with a good opportunity approaching the last 10 minutes.

Brugge held on for a draw which the crowd celebrated like a victory, justifiably considering the constellation of stars that had lined up against them.

Online, meanwhile, questions were being asked of whether PSG manager Mauricio Pochettino would be able to get the best of a team which – on paper at least – looks a dead cert to go deep in this year’s competition.

Others laid the blame squarely at the feet of Messi’s new teammates for apparently not doing enough to facilitate his greatness, sharing one clip in particular which showed the star searching for options while his fellow PSG players watched on.

Still searching for a maiden PSG goal, Messi and his team face Ligue 1 games against Lyon, Metz and Montpellier next, before a blockbuster Group A Champions League clash with Pep Guardiola’s Manchester City on September 28.

By that time, they will hope Messi has got off the mark for his new paymasters.