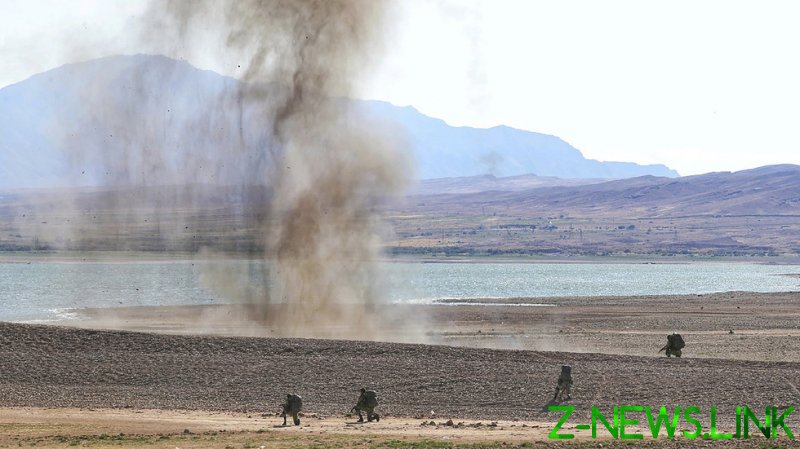 Iranian war games held along its northern border with Azerbaijan, leading to Baku threatening military deployment in retaliation, has sparked fear of war between the two countries.

But any such war would not end up being won by Tehran or Baku, but rather the United States and Israel, who would likely seize such an opportunity to fuel a Syria-style proxy war against the Islamic Republic.

The tensions that have arisen between Azerbaijan and Iran, as of late September, have seemingly popped up out of nowhere, but such an escalation was only a matter of time. The recent political quarrel has come about as a product of last year’s war between Azerbaijan and Armenia, over the Nagorno-Karabakh area, which resulted in a victory for Baku and allowed it to take over Karabakh from Armenia.

Iran had previously used its access through Armenian-controlled Karabakh to reach West Asia and Russia, sending its trucks and other means of transportation through the area, often free of customs.

Since Azerbaijan established its sovereignty over Karabakh, it has cracked down harshly on Iranian trucking and sought to establish itself as the leader of the Caucasus, intending to make itself the primary connection hub between Europe and Asia.

In order to undermine Baku, Iran has now announced that it will help Armenia establish a new bypass road that will cut out Azerbaijan. Although Tehran denies it initiated the recent war games along the Iran-Azerbaijan border with the intent of escalation, Azerbaijani President Ilham Aliyev criticised the military drills, asking, “Why now, and why on our border?”

The commander of the Islamic Revolutionary Guard Corps Ground Force offered one answer when he said last week that Iran would not tolerate its neighbors becoming “a safe haven and a base for the presence and anti-security activities of the fake Zionist regime.”

In the event that a clash does occur between Iran and Azerbaijan, it is likely that the Islamic Republic has the upper hand, being a regional military powerhouse. Yet Azerbaijan has more potential for causing Iran trouble through its allies and potential proxies than it does through its military might. Iran’s military drills, named Fatehan-e Khaybar (Conquerors of Khaybar), are also clearly not just aimed at sending a message to Baku, but also to Israel.

Israel armed Azerbaijan with roughly $825 million in armaments between 2006-2019. Although it would seem strange to some that Iran claims an Israeli presence on its northwestern border, as Israel is not even close geographically and its relationship with Azerbaijan looks on the surface to be mainly business based, it does have a point when it claims this, as the relationship runs far deeper than weapons trade.

A WikiLeaks-released cable sent by Donald Lu, the deputy chief of mission for the US embassy in Baku, to the US State Department revealed the nature of Azerbaijan-Israel ties, stating: “The relationship also affects U.S. policy insofar as Azerbaijan tries, often successfully, to convince the U.S. pro-Israel lobby to advocate on its behalf,” indicating a much closer connection than publicly admitted between the two sides. The document also revealed that, “with some humor, the Israeli DCM told us that Israeli businessmen expressed to her that they prefer corruption in Kazakhstan to that of Azerbaijan because in Kazakhstan one can expect to pay exorbitant fees to do business but those are generally collected at once, up front, whereas in Azerbaijan the demands for bribes never cease.”

Foreign Policy Magazine published a piece in 2012 in which they claimed that a senior US official confirmed that Israel had secured an airfield in Azerbaijan and that Israel could be using the country for a staging ground against Iran, a charge that Baku denies. Beyond this, Tehran has accused Azerbaijan of encouraging separatists groups inside of Iran, many of which staged demonstrations last year during the war between Azerbaijan and Armenia, calling for the re-establishment of what they call “Southern Azerbaijan.”

If any war was to be initiated between Baku and Tehran, this would be the greatest opportunity for Israel and the US to back ethnic Azeri separatists in a similar way to how the Obama administration funded and trained Syrian militants to overthrow the government of Bashar Assad. Out of Iran’s 83 million citizens, between 10-15 million of them are believed to be ethnic Azeris, meaning that just a small portion of them are needed to form an extremely problematic military force that could fight in urban warfare settings.

The United States and Israel have for long been hesitant to launch direct strikes against Iran, likely for fear of the regional war which it could spark, along with Iranian retaliation, yet a proxy war would be much less costly. During any such war, they could also launch strikes against Iran, especially Israel, which constantly threatens Tehran.

Turkey has already pledged its support to Azerbaijan, and during the 2020 Nagorno-Karabakh war, even sent ex-Syrian Jihadist mercenaries to aid Baku’s forces; some of these ex-Syrian militants are reportedly present along the Iranian border now.

Iran may be able to handle such a proxy war, but it would certainly be a tough challenge, while Azerbaijan would likely suffer badly. The war would benefit no one but regional players and super powers seeking regime change in Tehran, which is unlikely to succeed, as was the case in Syria. Such a war would result in perhaps hundreds of thousands of deaths and cause any number of unforeseen consequences. Iran knows the strategy which the likes of Israel is attempting to employ against it, meaning that such a war could lead to retaliatory action committed against Tel Aviv.