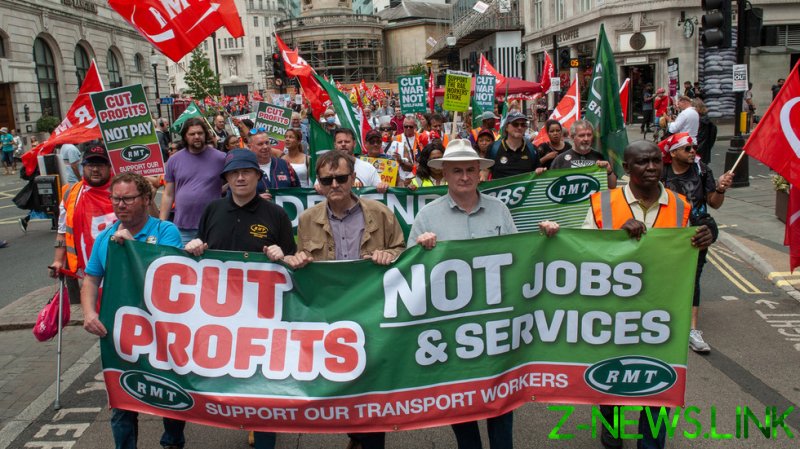 Thousands of protesters marched in London on Saturday, accusing the government of failing to tackle the rapidly rising cost of living in the UK. Similar marches took place in multiple Irish cities, where citizens are facing the same struggles.

“Prices are skyrocketing, yet boardroom bonuses are back to bumper levels,” she told the crowd. “Everyone who works for a living deserves to earn a decent living, but UK workers are suffering the longest and harshest squeeze on their earnings in modern history.”

“If we don’t get pay rising across the economy, we will just keep lurching from crisis to crisis. This cost of living emergency has not come out of the blue. It is the result of more than a decade of standstill wages.”

The protest drew a diverse crowd, including Labour Party supporters, communists and climate activists, the latter group holding signs demanding the government insulate houses across Britain to offset “fuel poverty.” Fuel costs have risen dramatically in the UK since Prime Minister Boris Johnson voluntarily cut Britain off from Russian oil and gas imports after Moscow launched its military operation in Ukraine in February.

Britons are now paying more for petrol and diesel than ever before. This comes as inflation reached a 40-year high of 9% in April, while food prices alone are predicted to spike by 15% this summer. Meanwhile, a recent report states that household disposable income will drop at the fastest rate since record-keeping began in the 1950s, and Brits will experience the steepest decline in living standards since 1956, according to the Office for Budget Responsibility.

Among the demonstrators was a sizable contingent of National Union of Rail, Maritime and Transport workers, who brought a marching band. The union had announced earlier on Saturday that it would hold the largest London Underground strikes in 30 years next week, after negotiations failed with the metro network’s operator over pay and benefits.

Simultaneous protests were organized in multiple Irish cities, including Dublin, Galway and Cork. Food and fuel prices have also been rising in Ireland, with the country also experiencing a housing shortage and homelessness crisis.