George Cameron Romero has long been planning to make a prequel to their debut zombie horror of his father, and now we have the first details about the painting.

Initially, the project was called simply “Origins” (Origins). Under this working title was launched crowdfunding company in 2014. And recently on his page on Facebook Cameron published a post in which he announced that the tape will indeed be removed, and its name now — “Rise of the living dead” (Rise of the Living Dead).

If you believe that the initial synopsis, the film tells about the events that occurred in the 1960-ies, shortly before “Night of the living dead”, and explain how there were zombies of George Romero:

In 1962 the world is under the threat of nuclear war. Dr. Ryan Cartwright chose the path of science and altruism, to find a way to save lives, even if countries will go for mutual assured destruction. But then he hardly could have imagined that in the next few years of your life will be engaged in well-funded military research going to do this in the dark corners of the world… And that he will create His perfect weapon for their government, and a terrifying curse for all mankind.

In fact, in his post, Cameron says more about my father and about what happened after his death, about the people who helped in the strength of their forces, shared the pain of loss or simply expressed their recognition of the departed master. As for the movie…

Many of you know that I’m working on this story for many years… My father read the script and called it “brilliant” (I’m not bragging, this is a real quote, I have an email with proof 🙂 ). Many have approached me with the offer to make this movie, and I have said many times “no”… Because even though I’m not some kind of “fine” artist, but this is something special… this is my… This is a letter of love to the father… to his work… the fact that he was once called the most dangerous Director alive… to the fact that the society in 1968 was eager to silence him as much as he wanted to celebrate.

It is written very emotionally and strongly. Cameron talked about the fact that I support him in this project, the operator Shane Hurlbut, who directed “Terminator: salvation”, and one of the most famous masters of special effects Robert Kurtzman, whose behind such films as “Nightmare on elm street 3: dream Warriors” and “evil dead 2”. It is unknown in what capacity these tough guys will participate in the development of the “Uprising of the living dead”, but it is logical to assume that one will stand for the camera, and the second to do make-up currency.

In addition, separately reported that the first replenishment of the caste has become a popular Belgian musician of Greek origin Dmitry Thivaios, better known by his stage name Dimitri Vegas. It was his face you can see above. Who will play Dimitri, is still unknown. Anyway, as you can see the specifics at the moment is not enough, however, the overall project becomes more and more interesting.

It seems that George Cameron Romero is serious and not going to discredit his father’s name. 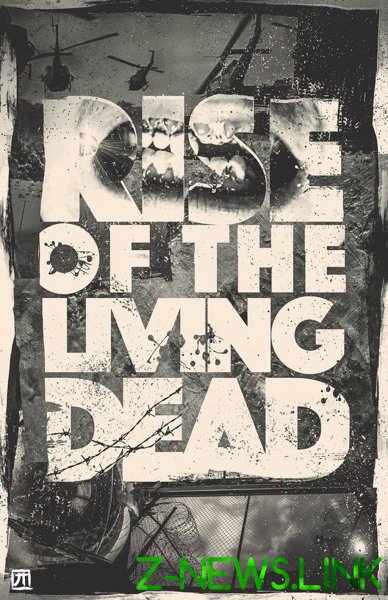