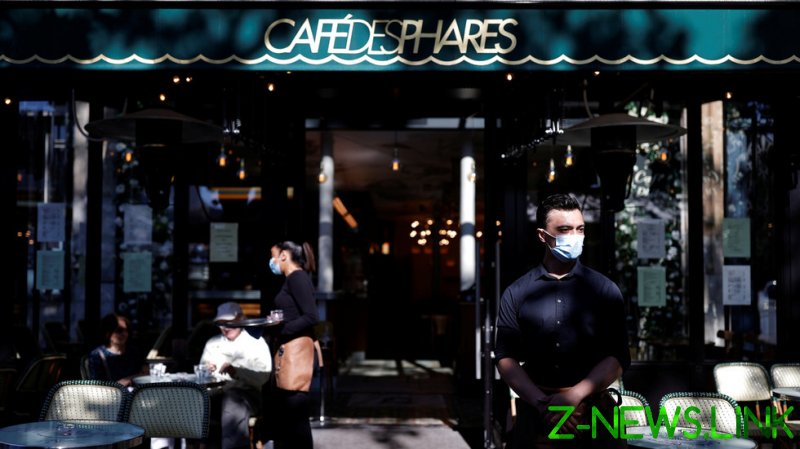 At a rally organized by the local trade association in the French capital on Thursday, the protesters staged the mock funeral procession with the words “Bars – restaurants – clubs” written on the coffin.Others held up a sign “Restaurant industry 1686-2020, RIP,” referring to the year when the first café-type business was opened in Paris. Some of the protesters have been seen brandishing smoke flares.

The activists denounced what they called “the killing of our sector by the government.” A manager at one endangered establishment told local media that the new restrictions would hit the whole industry badly. “After going through a particularly difficult year and three months of closure, we are once-again forced to close for at least two weeks. It’s the death of our business, in a way,” he lamented.

On Monday, the government placed Paris, along with several other areas, on a two-week maximum alert level for coronavirus. This means that bars and cafés had to shut down, while restaurants have to follow stricter “health protocols” in order to resume work. At the same time, universities and schools were ordered to limit their capacity.

Officials said that these tougher restrictions were necessary to tackle the growing Covid-19 infection rate. “These are braking measures because the epidemic is moving too fast,” Paris police chief Didier Lallement told reporters on Monday.

Authorities recorded 18,746 new cases on Wednesday – a daily record since the outbreak began – and 18,129 more on Thursday. President Emmanuel Macron has also promised “more restrictions” in areas where the infection continues to spread at a rapid pace.

France entered into a nationwide lockdown in March when the country was first hit by the coronavirus pandemic. The authorities eventually managed to curb the spread of the disease and had been gradually lifting restrictions, until the infection rate spiked again in recent weeks.