Riots spread in Sweden amid far-right plans to burn Koran 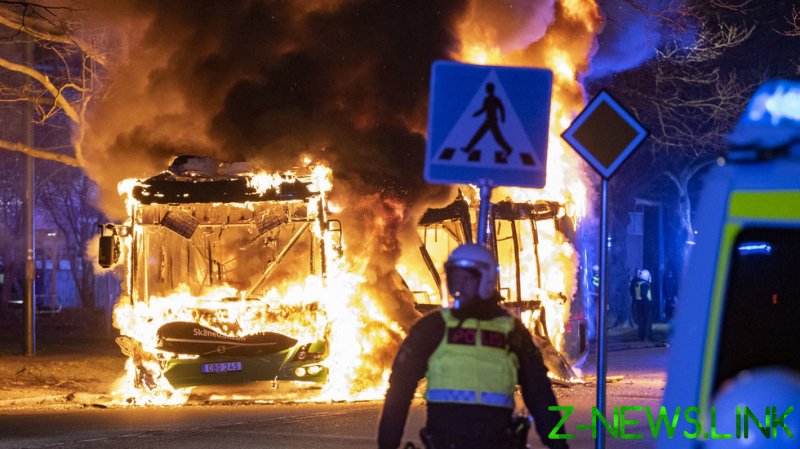 Chants of ‘Allahu Akbar’, police cars set on fire, and officers injured – this is what the run-up to Easter looked like in multiple towns and cities across Sweden this week, after the authorities gave a far-right anti-immigration group the go-ahead to stage rallies, which included plans to burn the Koran.

Unrest broke out on Thursday in the city of Linkoping, where gangs of youths clashed with police, injuring three officers. At least two people were detained.

The violence was sparked by the Swedish authorities’ decision to grant permission for a series of anti-Islam rallies. Organized by Rasmus Paludan – a right-wing Danish politician who has spent time in prison on racism-related charges – the events in various places across Sweden were intended to feature the burning of Islam’s holy book, the Koran.

Tensions came to a head on Friday when the Danish firebrand descended on the city of Orebro.

While Paludan and his supporters were initially allowed to hold their rally, it eventually had to be “dissolved” in light of the “serious security situation.” Mobs of rioters protesting against the far-right group pelted police with stones and set fire to four law enforcement vehicles.

So tense was the situation that police had to fire warning shots at one point, as confirmed by a police spokesperson to Swedish media.

While the local police department initially spoke of four injured officers and a bystander, it later updated that number, saying that “about ten colleagues” had sustained injuries.
According to the authorities, some of the policemen taken to the hospital had been hit on the head, while others had suspected arms fractures. Police described the events in Orebro as a “violent riot.”

Similar scenes played out in Sweden’s capital, Stockholm, as well as Malmo and Norrkoping.

On Saturday, unrest was reported in the town of Landskrona, with dozens of youths setting fire to vehicles, tires, and trash cans. According to the local police, none of the law enforcement personnel deployed in the town were harmed as a result. Officials noted that tensions were gradually dying down.

According to the Expressen newspaper, Paludan did manage to burn at least one copy of the Koran in Stockholm’s Rinkeby district on Friday. A video was also posted on Twitter, which appears to show him in the act.

Explaining their decision to grant Paludan permission to hold the controversial rallies across the country, the Swedish authorities cited freedom of speech.

Paludan’s anti-Islam performances and the subsequent rioting came ahead of Easter, and during the month of Ramadan.