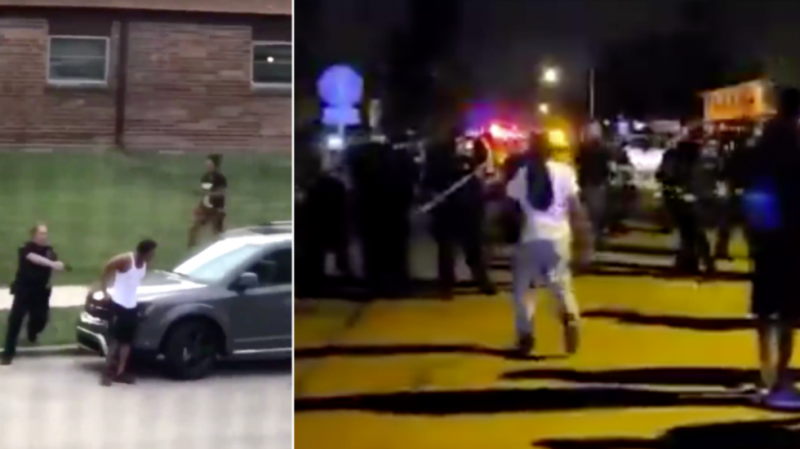 Rioters broke into the local courthouse and started a fire on the ground floor, as looting was reported in the area.

A clip circulating on social media shows an angry crowd surrounding a patrol car. A Molotov cocktail was thrown at the officers. A few seconds later one officer was seen suddenly falling to the ground, while a bystander said that he “just got bricked.”

Rallies were held on the streets with protesters chanting “No justice, no piece.” People demonstrated outside the Kenosha County Public Safety Building despite a curfew that was imposed until 7am on Monday.

Local media reported that people were smashing the windows of parked police cars.

Public anger was sparked by a police-involved shooting on Sunday night. The chilling video that quickly went viral shows a black man walking towards an SUV followed by two officers, when one of them opened fire at the man as he opened the car door. According to reports, at least seven shots were fired.

Police said they were responding to a “domestic incident,” without giving any additional details.

The victim, Jacob Blake, 29, was airlifted to a hospital in Milwaukee. A man claiming to be his friend wrote on social media that Blake was “out of surgery and in the ICU.”

Wisconsin Governor Tony Evers compared the shooting of Blake to the death of George Floyd and other black Americans who were killed in altercations with police.

“While we do not have all of the details yet, what we know for certain is that he is not the first black man or person to have been shot or injured or mercilessly killed at the hands of individuals in law enforcement,” Evers stated.