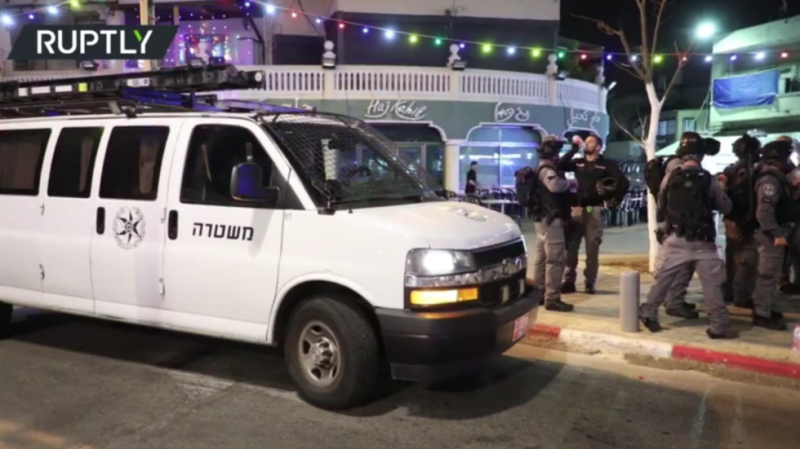 Riot police fired flashbang grenades to disperse the crowd, which was setting garbage containers on fire and smashing the windows of parked vehicles.

Mounted officers patrolled the streets where rioters were attempting to erect makeshift barricades and later set them on fire.

Protests broke out shortly after Rabbi Eliyahu Mali, the head of the Shirat Moshe Hesder Yeshiva, a religious school, was attacked in broad daylight on a street of the mixed Jewish-Arab town adjacent to Tel Aviv. The alleged photo of the attack, which shows a man kicking the rabbi while another man aggressively raises his fist, circulated on social media.

According to Israeli media, Mali and an associate were out scouting for an apartment to house the yeshiva. They reportedly entered a building to inspect the property, where they were then surrounded by hostile Arab residents who began yelling and ordered them to leave. It was at that moment Mali was beaten. The rabbi did not require hospitalization for his injuries, the Times of Israel reported.

Haaretz newspaper cited police saying that two people in their 30s were arrested in connection to the attack. They were said to be currently renting apartments in the building where the rabbi was assaulted.

Israeli Prime Minister Benjamin Netanyahu denounced the violence against the rabbi and thanked the police for quickly apprehending the suspects. The leader of the right-wing Yamina bloc, Naftali Bennett called the attack “a national disgrace.”

Jaffa’s Arab community held a counter-protest, chanting “Settlers out,” as some locals see the talks on selling the building to a yeshiva owner as an attempt to push the Palestinians out, according to Haaretz.