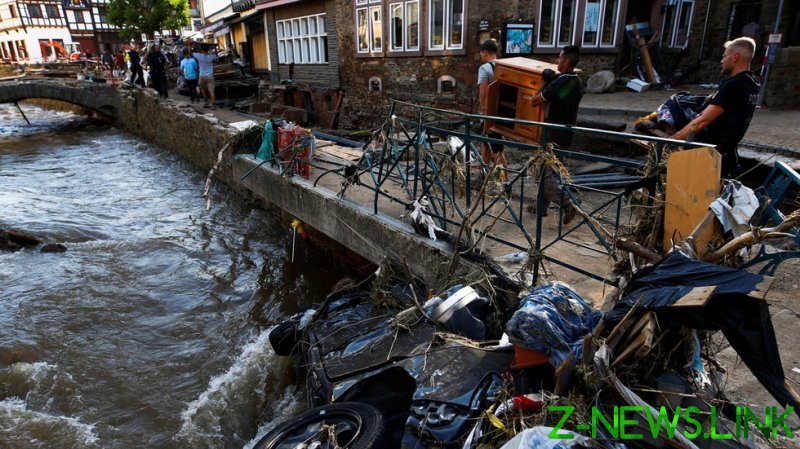 Attempts to demonise the German right wing for volunteering to help with clearing up in the aftermath of devastating floods purely for the political kudos that effort might return may have an element of truth but mein Gott, they really do take the bratwurst for hypocrisy.

The country’s leading left-leaning weekly magazine, Der Spiegel, claimed that social media channels run by political activists, including members of the country’s largest opposition party, Alternative für Deutschland (AfD), and others from the so-called Querdenker (lateral thinker) organisation, which includes anti-vaxxers and preppers (people who prepare for catastrophic events), have put out calls for helpers to travel to Ahrweiler in Rhineland-Palatinate, one of the worst-hit areas.

When the establishment comes to the rescue it’s all about pulling together as one. “When the right wing does the same thing, it’s a conspiracy theory,” leading AfD Euro MP Gunner Beck told RT.com.

Strangely, no accusations were made by the liberal media about attempts to curry support from malcontent football fans when Bayern Munich and FC Koln announced they were sending €100,000 to the flood victims.

Political hypocrisy blossoms in Germany just like any other nation but in this instance, the loss of around 200 lives, the €5bn in insurance claims, the struggle to provide timely and efficient help and the simple ill-preparedness for the catastrophic floods that began two weeks ago are part of wider nationwide malaise, says Beck.

“I know our young AfD members have been out there helping and they’ve been at it for several days but their help is needed because I think there is a problem,” he says.

“Things are progressing very slowly and of course the government is using the whole thing for its own purposes because they think it’s further incontrovertible proof that the end is nigh, that this is all to do with climate change and we’d all be better off if we just ate worms and insects.”

The Biblical imagery conjured up by Germany’s politicians sits alongside the shocking TV scenes of destruction caused by the floods, even more powerful as they are not what anyone is used to seeing in Germany, the economic powerhouse of Europe.

The Euro MP explains the impact, “Let’s be honest, it’s because these images are like those from a Third World country. We are reminded of Bangladesh where hundreds of people just vanish in sudden floods. People have this image of Germany being highly efficient, of being able to master everything but that image of Germany is no longer underwritten by the facts.

“Germans seriously overestimate themselves,” he says. “So when England beat us in the Euros people couldn’t believe it, everyone was firmly expecting a victory over the English despite the evidence showing that England has been steadily improving over the last five years.

“Germany has a reputation of invincibility almost and I think it’s gradually being dismantled in so many areas. I think the next thing to be dismantled is Germany’s economic invincibility which will lead towards serious problems so in some way the floods are a symbolic harbinger of that.

“And then of course there are the Olympics and you need to just wait for the final medals table to see it hasn’t been a good summer for Germany. What’s becoming obvious to us all, however, is that there are many worse yet to come.”