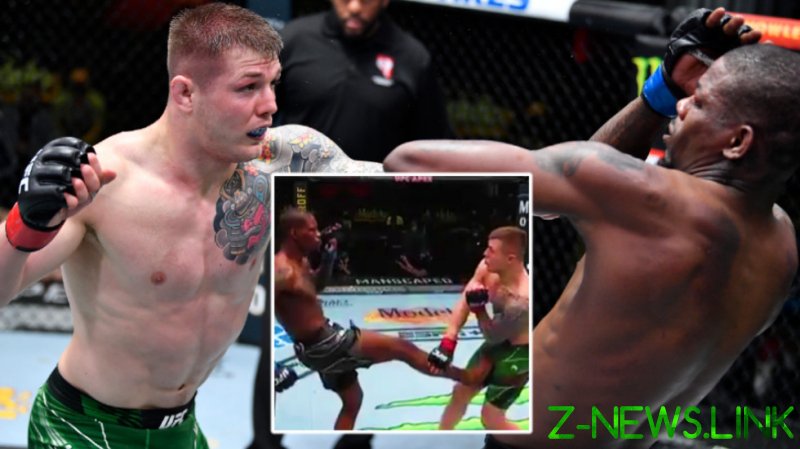 The Italian’s gritty, convincing victory was made all the more admirable by his absorption of a nasty shot within seconds of the start of the fight, reeling on the other side of the cage before resuming the action.

Vettori earned revenge by collecting his fifth successive win, increasingly taking Holland to ground as his opponent suffered his second defeat inside a month.

“Holland showing a ton of kicks, and one expertly placed to the balls,” said one viewer after watching the opening stages of the scrap.

“I believe the production crew just muted the octagon mics to censor a stream of Italian profanity from Vettori.”

Another observed: “There’s low blows and then there’s this – Kevin Holland cutting off circulation to Vettori’s balls.”

Veteran Derek Brunson, who beat Holland in Vegas last March, claimed that he had provided Vettori with a “blueprint” by showing the way to outwrestle ‘Trailblazer’.

The winner was not entirely satisfied with his performance. “I wanted to finish this guy and I wasn’t able to but it was a dominant win,” he reflected.

“I’m not the happiest right now but I keep winning, I keep progressing and I do it dominantly.”

The middleweight is now seeking a title fight with Israel Adesanya, against whom he lost on a split decision in April 2018.

“I want Adesanya next,” said a determined Vettori. “October, I want to fight him. I think I deserve it.

Holland accused Vettori, Brunson and Brendan Allen, who submitted him in 2019, of winning by “humping” him.

“I’ll be searching for some good sex partners to help me stop the humping,” he added of his preparations for his next fight.