‘Ridiculously over the top’: BBC creates special complaint form as viewers decry ‘too much coverage’ of Prince Philip death 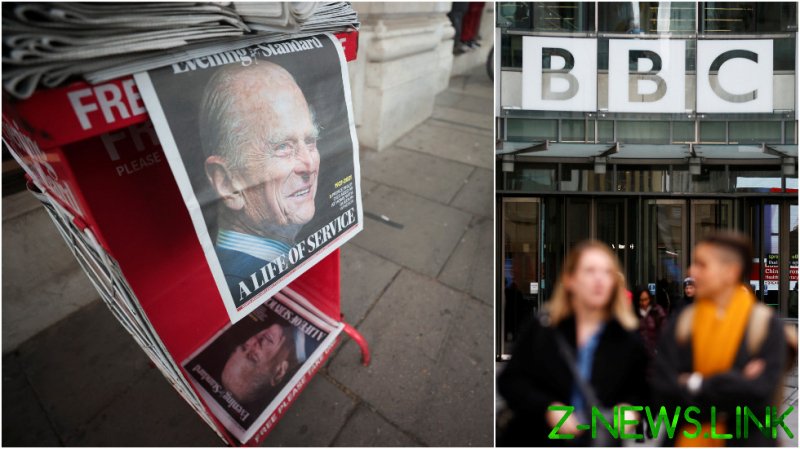 With the Duke of Edinburgh passing at the age of 99 on Friday, the British broadcaster kicked into overdrive, devoting ‘round-the-clock, wall-to-wall coverage to the late royal. But apparently finding the programming too much, viewers flooded the outlet with protests – so many that it created a new public complaint form specifically for that purpose.

“We’re receiving complaints about too much TV coverage of the death of HRH Prince Philip, Duke of Edinburgh,” the page says, inviting viewers to fill out the form and vowing to send a “response as soon as it becomes available.”

Joined by other outlets such as ITV and Sky News, the BBC scrapped its programming on several of its channels for most of Friday to cover the prince. An army of netizens took to Twitter to ridicule the media for what one said was “utterly, ridiculously, ludicrously, disproportionately over the top” coverage.

Even a BBC radio channel devoted to dance music was overtaken by the royal’s death, making for a somewhat jarring transition from pounding rave beats to ‘God Save the Queen.’

Though some viewers gave the outlet “full marks” for its extended coverage, saying it showed “the BBC at its best,” others were up in arms over missing their favorite TV shows. “No music or comedy for you plebs while we remember this man who was better than all of you,” one commenter joked.

The BBC was not the only news agency roasted for its programming on Friday, as many took umbrage with the UK’s Channel 4 for precisely the opposite reason – being one of the few outlets that did not overhaul its entire schedule for the day.

For some, however, that was a feature rather than a bug, finding a respite from the Philip frenzy in the channel’s business-as-usual programming.