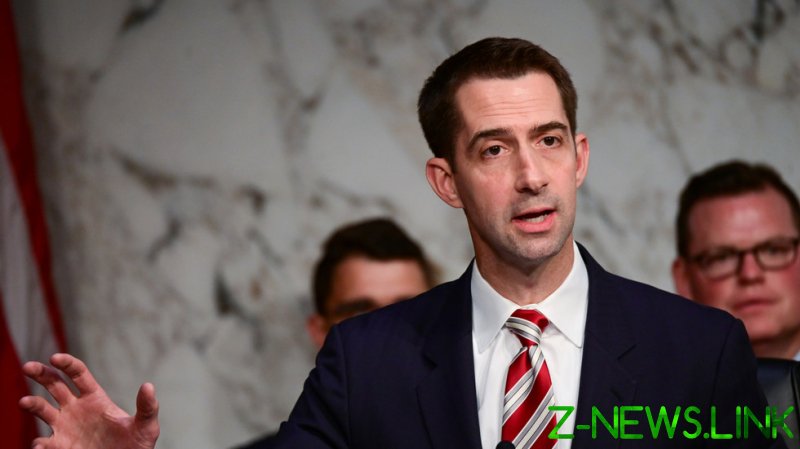 The outlet ran a piece last week in which it highlighted claims that Cotton had wrongfully described himself as a former US Army Ranger during his first election campaign in 2012. Salon was the first to push the allegation, reporting that Cotton had wrongfully attributed himself to be a part of the elite unit during his tours in Iraq and Afghanistan. Rather, the Arkansas senator had attended a two-month training course at the Ranger school, earning him the right to wear the Ranger insignia while not actually serving in a Ranger regiment. And thus him describing himself as an Army Ranger is false.

The scoop was quickly broadcast by Cotton’s political rivals. Colorado Democratic Rep. Jason Crow, a veteran of the Army’s elite 75th Ranger Regiment, posted a photograph of himself wearing a Ranger beret, apparently to demonstrate what a ‘real’ Ranger looks like.

“Hey@SenTomCotton, unless you wore one of these berets you shouldn’t be calling yourself a Ranger. Truth matters,” Crow wrote.

Cotton’s communications director clarified that the senator “graduated from Ranger School, earned the Ranger Tab, and served a combat tour with the 101st Airborne, not the 75th Ranger Regiment.”

Cotton himself responded to the accusations, saying on Fox News’ Special Report on Monday that he is being targeted for his politics and that the issue of him calling himself an Army Ranger was only brought up now. He added that people from senior military officials to “most of my buddies in the Army,” “most of the liberal media” referred to Ranger school graduates as Army Rangers, “until a conservative veteran was using the term that way.”

But Newsweek’s decision to join in on the pile-on revealed a glaring inconsistency in its own reporting: the outlet also referred to the Ranger school graduates as Army Rangers.

It was pointed out by Cotton’s communications team. The outlet had identified two female Ranger school graduates as Army Rangers in 2015, hailing the pair as the first two female Rangers, even while acknowledging in the same story that the 75th Ranger Regiment does not allow women to join its ranks.

Incredibly, Newsweek responded to this example of apparent double-standards by editing the five-year-old article to conform to its current definition of who qualifies as a Ranger. The 2015 piece no longer says that the two women “will become rangers,” instead explaining that they “will be allowed to wear the coveted Ranger tab on their uniforms.”

The outlet then added a correction to the years-old story, stating that the article had been modified to note that “completion of the course allows one to wear the Ranger tab, but does not make one a Ranger.”

The edits caused an uproar on social media, with many accusing Newsweek of trying to reshape the past to fit its own narrative.

“So what’s the goal here @Newsweek? Rewrite history to take away the achievements of these women simply to satisfy the liberal Left’s mission of cancelling conservatives?” asked Sen. Joni Ernst, (R-Iowa), a former member of the Iowa Army National Guard.

Many compared the ‘updated’ Ranger article to George Orwell’s 1984, in which historical records are falsified in order to make the past align with the dogmas of the all-powerful ruling party.

Commenters were also quick to point out that there were many examples of military organizations and high-ranking servicemembers referring to Rangers as anyone who graduates from the unit’s training school.

For example, the American Legion, a prominent US military veterans group, hailed the “trailblazing achievement” of the two women who passed through the school in 2015, describing them as the first female Rangers.

The National Review pointed to numerous cases in which people who graduate from the school have been called Rangers. The conservative outlet cited commencement speeches at the school given by senior military officials, in which graduates are clearly referred to as “Rangers.”

But others continued to insist that Cotton had played fast and loose with the truth, even accusing him of “stolen valor,” which can be prosecuted as a crime.