Bigfoot, he’s Bigfoot is one of the most unlucky “classic” monsters. Movies about Bigfoot shoot a lot – less than about vampires, but probably still more than about mummies – but a good almost none of them. The more pleasant, that sometimes still happens to be something like “Willow Creek”. If judged solely on the description, looks the film is not too promising – found footage about a couple of documentary filmmakers making a film about Bigfoot. Guess what it to end, frankly, easy. Forest, dark, twitchy camera, something moves in the bushes, someone gets eaten. Not original, predictable, ‘ve seen a hundred times. In this sense there are no surprises the viewer do not wait. The plot of “Willow Creek” really suffers from predictability. It’s all in the execution. 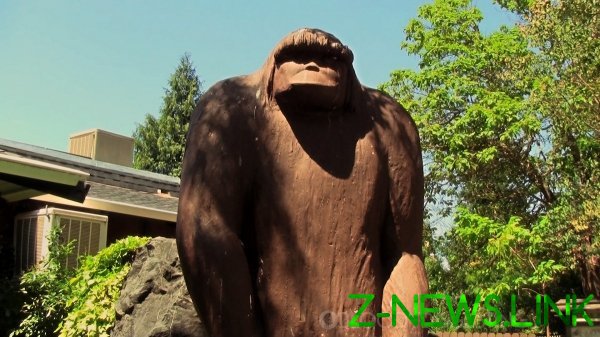 Bobcat goldthwait is known primarily as a comedian, but for the domestic audience will forever remain a Zed from “Police Academy”. Although the first film he directed in the early nineties, and since the beginning of the two thousandth in General, mainly directing and engaged, “Willow Creek” is his first experience in the horror genre. It’s amazing how well he managed to create a truly horrifying atmosphere, and the minimum means. “Willow Creek” in General the film is very minimalistic. No special effects, no complex shots (found footage), the bare minimum of characters (actually, two). Even the very structure of the film is extremely simple – is the first part (which are essentially the same documentary to be removed, the heroes, plus a little travel journals), there is a second with horror in the woods. Shares their key scene of the film – in fact the night in the tent. But thanks to the quality Director to watch the first part interesting, the second is terrible, and the scene in the tent – a different story altogether. Especially good in Goldthwaite with a sense of time. Every detail, every whisper, everything happens at exactly the right time, producing the maximum impression. The picture, overall it is so organic that if this is not specifically to reflect the efforts of the Director and sort of not noticeable. Watch yourself, and hamstring something shaking stronger and stronger. Perhaps the first part – “documentary” – it may seem a little constricted, but given the funny random characters, is pretty subtle humor and a pleasant main characters, boring becomes.

The tent scene is a top of minimalism. A long, long scene – about ten minutes, if not more, without any installation. Camera all the time in one position. In the tent with nothing but conversation is not happening. Outside only to hear the cries, and neither the audience nor the characters are not sure that there really is something there, it is quite possible that the local village kidding – and it seems like someone. But thanks to the carefully calibrated direction and quality work of the actors, to break away from the screen impossible. However, not least the scene is so successful, because by the time the audience is already quite familiar with the main characters and almost certainly are sympathetic to them. Nice people, touching relationship (not every girl to agree to go to who knows where in search of Bigfoot, which doesn’t even believe just to please the bride), and most importantly – they are not idiots. That is, of course, into the woods they went, in spite of the warnings, but who the hell listens to the strange village of peasants, who suggest “not hadith in this beautiful forest.” But the heroes have the sense not to try to escape from the woods in the middle of the night, not knowing the road. And – quite amazing – with the dawn of the heroes going and quickly dump without trying to look for screaming in the forest at night snow people. And what got lost, so it’s no big deal. The only thing that upsets – the ending. It is pointless and nothing prepared. Where is she come from, do not understand. The overall impression of the film she of course spoiled, but not much, everything was too good. “Willow Creek” – an unexpected and pleasant surprise. One of the very few really good films about Bigfoot, and generally one of the highest quality found footage films of recent years. One can only hope that Goldthwaite will return to the horror genre.